Trump made his claim in an interview with Piers Morgan, host of the ITV show “Good Morning Britain,” that aired on Jan. 28.

Trump: There is a cooling and there is a heating and I mean, look – it used to not be climate change. It used to be global warming. Right?

Trump: That wasn’t working too well, because it was getting too cold all over the place. The ice caps were going to melt, they were going to be gone by now, but now they’re setting records, so OK, they’re at a record level.

Technically, the term “ice cap” refers to a type of glacier that covers less than 50,000 square kilometers (19,305 square miles).

But, as Reuters points out, “Many people use the term ‘ice cap’ to refer to polar sea ice or vast ice sheets on Greenland and Antarctica.”

The two swaths of ice in Greenland and Antarctica contain 99 percent of the world’s freshwater ice. If they melted entirely, it would lead to hundreds of feet of sea level rise, says the National Snow and Ice Data Center, which is based at the University of Colorado, Boulder. 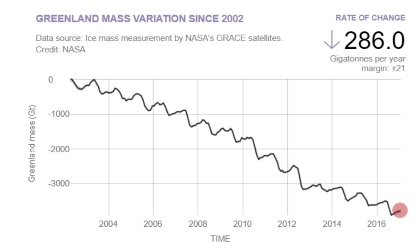 However, the Greenland ice sheet has melted considerably faster, at a rate of about 286 gigatonnes per year on average (see chart to left). That’s compared with about 127 gigatonnes per year on average for the Antarctic ice sheet (see chart below). (One gigaton is equal to 1 billion metric tons, or 1.1 billion U.S. tons, which can fill 400,000 Olympic-size swimming pools.)

Scientists distinguish ice on these land masses from sea ice, which floats on the ocean’s surface near the poles. Sea ice around Greenland, or Arctic sea ice, has also seen a general decline, according to NASA. 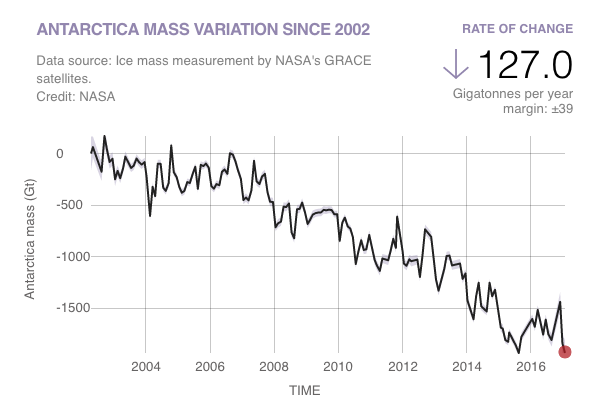 Sea ice levels at the poles fluctuate seasonally — in summer, they’re at their lowest levels of the year, and in winter they’re at their highest. Scientists can measure decline in these ice sheets over time by evaluating whether winter and summer levels are smaller or larger than previously recorded.

“It is tempting to say that the record low we are seeing this year is global warming finally catching up with Antarctica,” said Walt Meier, a sea ice scientist at NASA, back in March 2017.

“However, this might just be an extreme case of pushing the envelope of year-to-year variability,” he added. “We’ll need to have several more years of data to be able to say there has been a significant change in the trend.”

Still, ice caps around the world are far from hitting record high levels, as Trump implied. The trend points downward.

In his interview with ITV, Trump also made two other claims we’ve written about before.

First, Trump’s statement that the globe has seen cooling and heating of late isn’t supported by the evidence.

As we wrote in a previous article, the National Oceanic and Atmospheric Administration has said that 2016 set a new record high annual temperature (along with 2005, 2010, 2014, and 2015) and marked “the 40th consecutive year (since 1977) that the annual temperature has been above the 20th century average.”

Last year continued that trend. At likely the third warmest year on record, 2017 marked the 41st consecutive year above the 20th century average.

Second, Trump’s claim that terminology switched from “global warming” to “climate change” because “it was getting too cold all over the place” is also false.

As we’ve written before, scientists still use both terms — “global warming” and “climate change” — which refer to different phenomena. 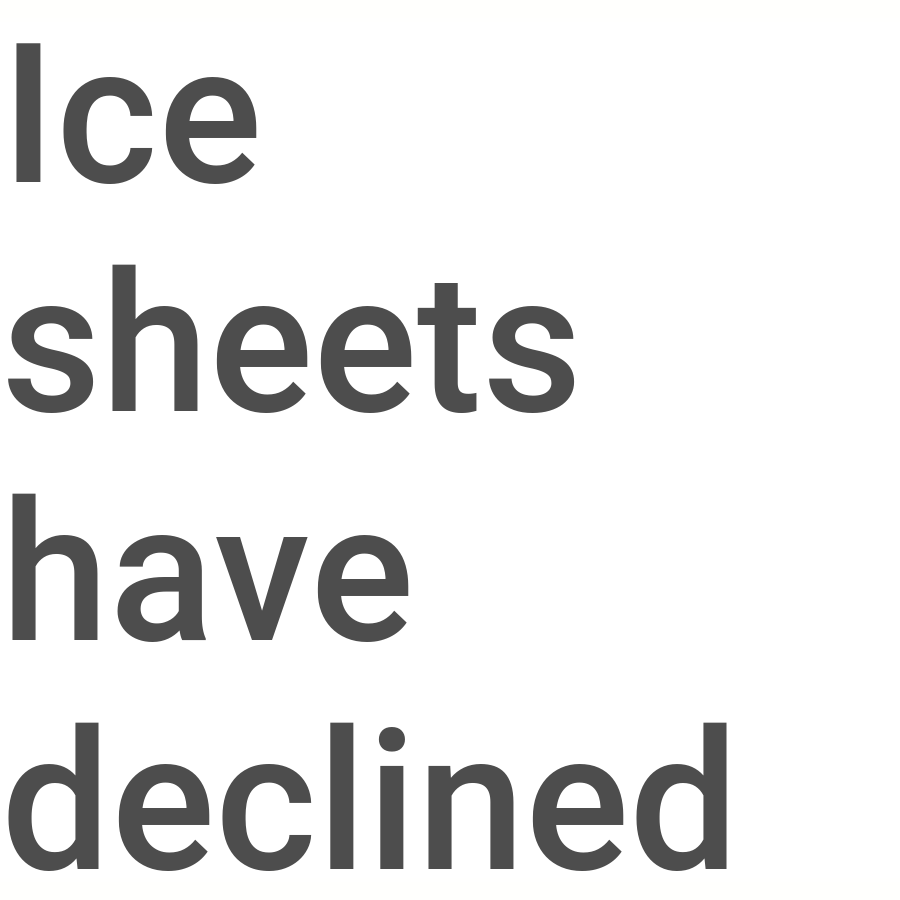 Ice sheets have declined
“The ice caps were going to melt, they were going to be gone by now, but now they’re setting records, so OK, they’re at a record level.”
Donald Trump
President of the United States
https://www.whitehouse.gov/administration/president-trump