It’s true that the nonpartisan Joint Committee on Taxation estimates that cutting the top corporate tax rate from 35 percent to 21 percent will reduce federal tax revenues by $1.35 trillion over 10 years — the figure that Pelosi cited. But she ignored other tax changes in the new law that will increase taxes for corporations, resulting in a net savings of less than half of that.

In its entirety, the new law will cut taxes by an estimated $1.5 trillion over 10 years for all taxpayers, including $1.1 trillion for individual taxpayers, according to the JCT.

Pelosi criticized the Republican tax cut at her weekly press conference on Jan. 11. “There is up to at least a $1.3 trillion tax break for corporations unpaid for,” she said.

Her office said she was referring to the cut in the corporate tax rate. But that is just one line item of many in the JCT’s analysis of the new law’s budget effects over 10 years.

“The Joint Tax Committee estimates that all the business tax provisions will reduce receipts by $654 billion between 2018 and 2027,” Eric Toder, co-director of the Tax Policy Center, told us via email. “Thus, other provisions are estimated to offset slightly more than half of the $1.35 trillion revenue loss from reducing the corporate tax rate to 21 percent.”

Here are some of the changes in the “business tax reform” category that will increase tax revenue, according to the JCT:

Toder said that some of these changes will affect not just corporations but also pass-through businesses, such as sole proprietorships, LLCs and partnerships. The owners of these companies do not pay corporate taxes; they pay individual income taxes on their share of business income.

However, of the tax increases listed above, Toder said that “the interest deduction limitation is probably almost all corporate, modification of the net operating loss deduction is all corporate, and the amortization of R&D and domestic production deduction mostly affect corporate businesses.”

“In addition,” Toder said, “JCT estimates that the international tax reform provisions will raise $324 billion, almost all from corporations, over 10 years.” But Toder said that nearly all of the revenue gain comes a one-time, discounted tax rate on foreign profits that U.S. multinational corporations have kept overseas since 1986.

As we wrote in that case, changes to the tax code would, on net, result in a little more than $1.1 trillion less being paid in individual taxes over the next 10 years. Like Pelosi, Trump was not counting provisions of the new law that increase taxes.

Editor’s note: For more about the impact of the new tax law, please see our item “A Guide to the Tax Changes.”

Misleading
“There is up to at least a $1.3 trillion tax break for corporations unpaid for.”
Rep. Nancy Pelosi
House Democratic Leader
https://www.democraticleader.gov/ 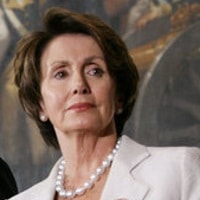