In Republican primaries where loyalty to President Donald Trump’s agenda is a litmus test for many voters, the approval of a $1.3 trillion omnibus spending bill has become a political weapon — no matter how lawmakers voted.

In fact, Rokita, now running for the Senate, and Pittenger, who seeks to retain his seat in the House, both support Trump’s wall.

The vote on the $1.3 trillion spending bill put Republican supporters of Trump’s proposed border wall in a bind. It included $1.6 billion for border security, including money to replace fencing and build new barriers. But the funding was far short of the $25 billion Trump sought, and it cannot be used for any of the wall prototypes ordered by the president.

Some Republicans took a take-what-you-can-get approach and voted for the bill. Others took a hard line and voted against the bill, saying it fell well short of meaningful funding for the promised wall.

In the Indiana and North Carolina primaries, the Republican candidates have tried to portray themselves as more supportive of Trump’s agenda than their opponents. But how one voted on the omnibus spending bill is an unreliable measure. After all, the president himself waffled on the bill before he signed it.

Trump himself was conflicted about the bill. In a tweet, the president said he was considering vetoing it, in part, because “the BORDER WALL, which is desperately needed for our National Defense, is not fully funded.” Ultimately, on March 23, Trump did sign the bill, though he said there were “a lot of things that I’m unhappy about” in it.

As we have written before, the omnibus bill funds some new fencing, but the new barriers are not the kind of solid, concrete wall Trump once described during the campaign. The bill also precludes funding for barriers that are anything like the wall prototypes Trump visited on a trip to California in mid-March.

And, while Trump administration officials said the omnibus would fund about 100 miles of “new” wall, most of that will replace existing border fencing deemed inadequate or dilapidated. In all, we found the bill will fund less than 40 miles of new barrier where there wasn’t any before.

The president would ultimately like to have 1,000 miles of barrier, according to Customs and Border Protection Acting Deputy Commissioner Ronald D. Vitiello, and there is currently 654 miles of fencing. So the funding bill leaves the president more than 300 miles short of his goal.

Despite Trump’s misgivings about the border wall funding in the bill, once he signed it, he repeatedly said the funding was enough to finally get his long-promised wall started.

Trump also tweeted that “much can be done with the $1.6 Billion given to building and fixing the border wall,” adding that the money was “just a down payment” and promising that “the rest of the money will come” in the future.

Much can be done with the $1.6 Billion given to building and fixing the border wall. It is just a down payment. Work will start immediately. The rest of the money will come – and remember DACA, the Democrats abandoned you (but we will not)!

An ad from Indiana Republican Rep. Luke Messer says it was.

Messer’s ad asserts that while Rokita (who has taken to sporting MAGA hats in campaign ads) “pretends he always supports President Trump,” his voting record says otherwise. For example, the ad says, Rokita voted “against Trump’s border wall.” The small print in the ad cites “Roll Call Vote #127″ on March 22. That’s the vote on the omnibus spending bill, which passed the House 256-167.

Republicans voted in favor of the bill 145-90. Messer and Rokita, both currently members of the House, are facing each other in a bid for the Senate. Rokita voted against the omnibus bill.

Messer, who voted for the bill, told Fox59 in Indianapolis that he “voted to stand with President Trump” and that the bill “provides a down payment on President Trump’s border wall.”

“This is the only thing that has actually funded the wall so far,” Chasen Bullock, Messer’s campaign manager, told us. There was no other legislative option on the table for greater wall funding, Bullock added, so when Rokita voted against the bill, he “didn’t support border wall funding when he had the chance.”

In a press release explaining his vote, Rokita said that while “there are good provisions in this bill,” it is “littered with concessions to liberal Democrats” and “fails to fund an effective wall.”

“Donald Trump and I still want to build the wall, and all we got was a few miles of fence and no concrete,” Rokita said in an interview with CBS4 in Indianapolis after the vote.

Both Messer and Rokita support Trump’s call for a border wall. Voters can question Rokita’s hard-line stance, or argue that it’s better to take a little something rather than nothing, but it’s misleading for Messer’s ad to claim that Rokita “voted against Trump’s border wall,” when his opposition was rooted, in part, in the belief that it didn’t fund the border wall enough.

In the 2016 election, Trump won the state of Indiana by nearly 20 percentage points against Hillary Clinton. According to a FiveThirtyEight analysis, Rokita has voted with Trump 90.1 percent of the time, compared with Messer’s 92.9 percent. In the May 8 primary, Rokita and Messer also face former state Rep. Mike Braun — who said he would have voted against the omnibus bill. The winner will take on Democratic Sen. Joe Donnelly.

In North Carolina, the script was flipped, with Republican congressional candidate Mark Harris asserting in a Facebook post that when his opponent, Rep. Robert Pittenger, voted for the omnibus bill he “stood against funding for the border wall.”

Robert Pittenger stood against funding for the border wall.Congressman Pittenger and other Republicans committed to us…

The Washington Examiner article attached to the post includes quotes from some conservative Republicans who viewed the bill as a missed opportunity to get significantly more funding for a border wall. Rep. Jim Jordan, a founder of the House Freedom Caucus, said the bill “didn’t fund what we said we would,” and that it’s now “going to be tough” to get the full $25 billion for the wall that the president initially requested. He voted against it.

In an interview with Fox News, Jordan said of the omnibus bill: “The one thing we don’t fund is the one issue we all campaigned on — a border security wall — and that is not in the legislation.”

Jason Williams, campaign manager for Harris, echoed that sentiment in a phone interview, saying the bill includes “some funding for some fencing and some border security, but not the actual construction of the wall itself.”

We explored this question in detail in our story “Has the Border Wall Begun?” As we wrote, “The short answer is that the omnibus bill funds some new fencing, though far less than Trump had hoped it would. The new barriers are also not the kind of solid, concrete wall Trump once described during the campaign. Nor is it anything like any of the prototypes Trump visited in mid-March.”

Pittenger’s campaign pointed us to statements from Republican leaders who said the omnibus funds the wall.

In a statement provided to us, Pittenger said: “As Chairman of the Congressional Task Force on Terrorism and Unconventional Warfare, I have always been in favor of building a wall and securing our porous southern border. The FY2018 omnibus and earlier legislation I supported clearly provides funding to begin construction, and President Trump himself tweeted that ‘much can be done with the $1.6 billion given to building and fixing the border wall.'”

One can argue, as Harris does, that the omnibus bill should have provided more funding for Trump’s wall, or even that the funding in the bill does not deliver on Trump’s promise. But it is misleading to say Pittenger “stood against funding for the border wall” for several reasons: a) the bill Pittenger voted for included funding to replace existing barriers and build new ones; b) the president called it an “initial down payment” on his wall; and c) Trump signed — and did not veto — the bill.

According to FiveThirtyEight, Pittenger votes in line with Trump’s position 97.1 percent of the time. In North Carolina’s 9th Congressional District, Trump won by a margin of 11.6 percent.

This is the second time Harris has squared off against Pittenger in a Republican primary for the 9th Congressional District. In 2016, Pittenger edged Harris by a mere 134 votes in a three-way race.

Joining this year’s rematch is Republican Clarence Goins. Christian Cano and Dan McCready vie for the Democratic nomination. The primaries will be held on May 8. 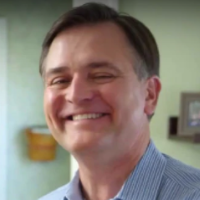