Sen. Lindsey Graham went beyond what is publicly known about an accusation that Supreme Court nominee Brett Kavanaugh was involved in a sexual assault as a teenager, saying “everybody named in regard to being there said it didn’t happen.”

It’s true that all four of the people Christine Blasey Ford has identified as being in the house that night she says she was assaulted have said they don’t recall the incident, or even being there. But not all of them said it didn’t happen.

Kavanaugh says it didn’t happen. And Mark Judge, who Ford says was in the room during the assault, says, “I never saw Brett act in the manner Dr. Ford describes.”

The other two identified by Ford as being in the house that night, but who were not said to have witnessed the alleged assault, also said they had no recollection of being at such a gathering. But they didn’t go so far as to say, “It didn’t happen.” In fact, one of them, Leland Ingham Keyser, a close friend of Ford, told the Washington Post she believes Ford’s allegation.

Asked about Ford’s allegations on “Fox News Sunday” on Sept. 23, Graham, a member of the Senate Judiciary Committee said, “I will do the following: listen to Dr. Ford, compare that to everything in the record and make a decision. This accusation is 36 years old. I don’t know when it happened, I don’t know where it happened and all the people who have been named say it didn’t happen.”

Fox News’ Chris Wallace later asked Graham if there was “anything that Dr. Ford could say that would persuade you to vote against Kavanaugh’s nomination.”

“What am I supposed to do? Go ahead and ruin this guy’s life based on an accusation,” Graham said. “I don’t know when it happened, I don’t know where it happened and everybody named in regard to being there said it didn’t happen. I’m just being honest.”

Let’s review what has been said by Ford and each of the people identified by Ford as being at the house in Maryland that night in the early 1980s.

First, here is Ford’s description of the incident, which she sent in a letter to Sen. Dianne Feinstein on July 30.

Ford letter, July 30: Brett Kavanaugh physically and sexually assaulted me during High School in the early 1980’s. He conducted these acts with the assistance of his close friend, Mark G. Judge. Both were 1-2 years older than me and students at a local private school. The assault occurred in a suburban Maryland area home at a gathering that included me and 4 others. Kavanaugh physically pushed me into a bedroom as I was headed for a bathroom up a short stairwell from the living room. They locked the door and played loud music, precluding any successful attempts to yell for help. Kavanaugh was on top of me while laughing with Judge, who periodically jumped onto Kavanaugh. They both laughed as Kavanaugh tried to disrobe me in their highly inebriated state. With Kavanaugh’s hand over my mouth, I feared he may inadvertently kill me. From across the room, a very drunken Judge said mixed words to Kavanaugh, ranging from “go for it” to “stop.” At one point, when Judge jumped onto the bed, the weight on me was substantial. The pile toppled and the two scrapped with each other. After a few attempts to get away, I was able to take this opportune moment to get up and run across to a hallway bathroom. I locked the bathroom door behind me. Both loudly stumbled down the stairwell, at which point other persons at the house were talking with them. I exited the bathroom, ran outside of the house and went home.

For his part, Kavanaugh “categorically and unequivocally” denied the allegation immediately after it was made public. “I did not do this back in high school or at any time,” Kavanaugh said in a statement put out by the White House on Sept. 14.

Kavanaugh repeated that in an interview with Martha MacCallum on Fox News on Sept. 24.

“I’ve never sexually assaulted anyone, not in high school, not ever,” Kavanaugh said. “I’ve always treated women with dignity and respect.”

MacCallum, Sept. 24: You don’t remember ever being at parties with her ever?

Kavanaugh: I do not. And this is an allegation about a party in the summer of 1982 at a house near Connecticut Avenue and East-West Highway with five people present. I was never at any such party. The other people who are alleged to be present have said they do not remember any such party. A woman who was present, another woman who was present, who is Dr. Ford’s lifelong friend, has said she doesn’t know me and never remembers being at a party with me at any time in her life. All I’m asking for is a fair process where I can be heard.

MacCallum: And to this date, no one has corroborated the story that she has told. As you accurately point out, but is there — so there’s no chance that there was something between the two of you that maybe she misunderstood the exchange that you had? Nothing ever physical, you never met her, never kissed her, never touched her, nothing that you remember?

Kavanaugh: Correct. I — I never had any sexual or physical activity with Dr. Ford. I’ve never sexually assaulted anyone in high school or otherwise. …

MacCallum: So, when she says there’s no doubt in her mind that it was you, because she was asked that — is it possible that you maybe confused him, maybe it’s a mistaken identity, maybe it was someone else. She said absolutely not.

Kavanaugh: I have never sexually assaulted anyone. I was not at the party described. I was not anywhere at any place resembling that in the summer of 1982. The other people alleged to be there don’t say anything like that. And the woman who’s alleged to be there, who’s her friend, says that she doesn’t know me and doesn’t recall ever being at a party with me in her life.

What about those other people identified by Ford as being at the house that night?

Let’s start with Mark Judge, a conservative writer, who Ford says was in the room when the assault took place. Through his attorney, Judge sent the following statement in an email to the Senate Judiciary Committee:

Judge statement, Sept. 18: I did not ask to be involved in this matter nor did anyone ask me to be involved. The only reason I am involved is that Dr. Christine Blasey Ford remembers me as the other person in the room during the alleged assault.

In fact, I have no memory of this alleged incident. Brett Kavanaugh and I were friends in high school but I do not recall the party described in Dr. Ford’s letter. More to the point, I never saw Brett act in the manner Dr. Ford describes.

I have no more information to offer the Committee and I do not wish to speak publicly regarding the incidents described in Dr. Ford’s letter.

The Washington Post, which published an interview with Ford on Sept. 16, reported that “Ford said there were four boys at the party but only two in the room.”

In an update to the Senate judiciary investigation posted on Sept. 23 — which Graham’s press office pointed us toward to back up the senator’s comment — the committee states that it “learned the identities of the four other individuals Dr. Ford claimed were at the party when the incident took place. They were not, however, all boys, as Dr. Ford apparently told her therapist and the Washington Post. The four individuals Dr. Ford claimed attended the party were Judge Kavanaugh, Mr. Judge, Mr. Patrick J. Smyth, and Ms. Leland Ingham Keyser.”

Keyser, a longtime friend of Ford’s, contacted the Senate Judiciary Committee via an email on Sept. 22 from her counsel, Howard J. Walsh III. “Simply put, Ms. Keyser does not know Mr. Kavanaugh and she has no recollection of ever being at a party or gathering where he was present, with, or without, Dr. Ford,” Walsh wrote to the committee.

The Washington Post reported on Sept. 23 that in a “brief interview” with Keyser at her home in Silver Spring, Maryland, “Keyser said that she did not recall the party, but that she was close friends with Ford and that she believes Ford’s allegation.”

Smyth also provided a statement to the Senate Judiciary Committee on Sept. 19, through his counsel.

Smyth, Sept. 19: I understand that I have been identified by Dr. Christine Blasey Ford as the person she remembers as ‘PJ’ who supposedly was present at the party she described in her statements to the Washington Post. I am issuing this statement today to make it clear to all involved that I have no knowledge of the party in question; nor do I have any knowledge of the allegations of improper conduct she has leveled against Brett Kavanaugh.

Personally speaking, I have known Brett Kavanaugh since high school and I know him to be a person of great integrity, a great friend, and I have never witnessed any improper conduct by Brett Kavanaugh towards women. To safeguard my own privacy and anonymity, I respectfully request that the Committee accept this statement in response to any inquiry the Committee may have.

So it’s accurate that Kavanaugh “said it didn’t happen,” as Graham put it. And Judge said, “I never saw Brett act in the manner Dr. Ford describes.” But the other two didn’t go that far. Smyth and Keyser both said they had no recollection of the party/gathering that Ford described. But they didn’t say it never happened. In fact, Keyser told the Washington Post that she believes Ford.
Share the Facts
2018-09-25 21:15:36 UTC
FactCheck.org

FactCheck.org Rating:
Exaggerates
On Christine Ford's accusation against Supreme Court nominee Brett Kavanaugh: "everybody named in regard to being there said it didn't happen."
Lindsey Graham
U.S. Senator
http://video.foxnews.com/v/5838892116001/?#sp=show-clips 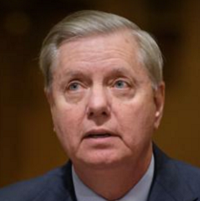