In response to a question about climate change, President Donald Trump falsely claimed that the United States was “the cleanest we’ve ever been.” Data from a variety of sources show that while the country has made strides in the last decade, its carbon dioxide, or CO2, emissions are far from their lowest point.

The president’s comments came on Nov. 26 after he was asked by a journalist about the latest National Climate Assessment. The report, which was released on Nov. 23 and written by more than 300 government and non-government experts, describes in detail how climate change has already begun to affect the nation. It also warns of future harm to people, ecosystems and the economy if more action isn’t taken soon.

Here is the exchange:

Reporter, Nov. 26: Mr. President, have you read the climate report yet?

Reporter: They say economic impact could be devastating — of climate change.

Reporter: You don’t believe it?

Trump:  No.  No. I don’t believe it. And here’s the other thing — you’re going to have to have China, and Japan, and all of Asia, and all of these other countries — you know, it — it addresses our country.

Right now, we’re at the cleanest we’ve ever been, and that’s very important to me. But if we’re clean but every other place on Earth on is dirty, that’s not so good.

Trump’s comments echo previous claims that the United States has the cleanest water and air, which we’ve previously debunked. Compared to much of the world, America has enviable air and water, but it doesn’t rank as the “cleanest,” based on the 2018 Environmental Performance Index.

This time, it isn’t entirely clear what the president means by “cleanest,” and the White House did not provide clarification. But when talking about climate change, the relevant metrics are greenhouse gases — particularly CO2, which is the primary driver. And here, the U.S. is neither tops in the world nor at its historical best.

Some of the most comprehensive data about CO2 emissions come from the Energy Information Administration, or EIA. The agency reports on energy-related CO2 emissions, which includes things such as transportation, heating and electricity — and has been doing so since the early 1970s. Since 98 percent of all CO2 emissions in the U.S. stem from the energy sector, this is a pretty good indication of the national trend.

The data, which we’ve graphed below, reveal that despite a promising downward slope, CO2 emissions are nowhere near their nadir. In 2017, U.S. carbon emissions were 5,144 million metric tons — the lowest it has been since 1992. But emissions were lower than that every year from 1973 through 1992. 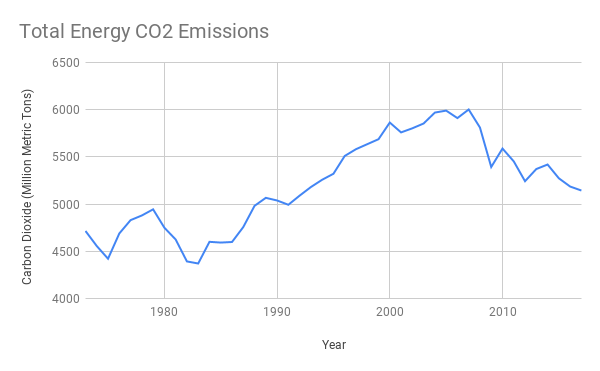 World Bank data, which goes back even further, tells a similar story. In 2014, emissions were trending down, but were still more than 1.8 times those in 1960.

One reason for the increase in emissions is a growing population — which improves the picture for the U.S. when measuring carbon emissions on a per-capita basis. These values have tumbled after peaking in the early 1970s. But they are still higher than the lowest recorded points in the 1960s. On both absolute and relative terms, then, it is false to claim that America is at its “cleanest.”

One caveat to these values is that they do not include other greenhouse gases or CO2 emissions from non-energy sources. EPA data does factor these in, but they only go back to 1990, making longer historical comparisons difficult — especially because this period is precisely when emissions begin to reach present-day levels.

Finally, it is worth mentioning that the recent downward trend in CO2 emissions isn’t expected to continue in the short term. In October, the EIA projected that CO2 emissions will go up 2.2 percent in 2018. If that happens, it will be the first rise in carbon emissions since 2014.

The president also compared the U.S. to other countries when he said, “if we’re clean but every other place on Earth on is dirty, that’s not so good.”

Although the U.S. has made progress on reducing its greenhouse gas emissions, it is by no means one of the lower emitters on the world stage.

Data from the International Energy Agency for 2016 show that the U.S. is second to China in its total CO2 output, followed by India, Russia, and Japan. And the U.S. is higher than all of these countries in its per-capita values. In fact, America ranks 10th highest for its CO2 emissions per person, behind No. 1 Qatar, as well as Saudi Arabia and Australia.

So even though this number has fallen dramatically in the last decade, America is disproportionately contributing to climate change — far more than even China, which ranks 39th on a per-capita basis.

Other countries may need to reduce their CO2 emissions, but to say that the U.S. is already “clean” is false.

FactCheck.org Rating:
False
In response to a question about the latest National Climate Assessment: "Right now, we’re at the cleanest we’ve ever been."
Donald Trump
President of the United States
https://www.whitehouse.gov/briefings-statements/remarks-president-trump-marine-one-departure-26/