Q: Can you lose your hunting license if you vote in North Dakota?

A: No. A partisan Facebook ad is referring to resident hunting licenses in other states being invalid once someone has North Dakota residency.

Five days before the midterm elections, an ad started circulating on Facebook with a graphic that said, “HUNTER ALERT.”

But it didn’t announce any new information for hunters. Instead, it made this claim: “ATTENTION HUNTERS: VOTING IN NORTH DAKOTA COULD COST YOU YOUR OUT-OF-STATE HUNTING LICENSES.”

The ad was paid for by the North Dakota Democratic-NPL, which is the name of that state’s Democratic Party, and it ran six times, according to information from Facebook’s “ad archive.” Some of the ads were seen by more than a thousand people in North Dakota before Facebook took down the ads for violating its advertising policies, according to the “ad archive” information.

The ad linked to a page on the party’s website that gave only slightly more information. It said:

North Dakota Democratic-NPL website: By voting in North Dakota, you could forfeit your hunting licenses.

If you want to keep your out-of-state hunting licenses, you may not want to vote in North Dakota’s 2018 election.

We asked the North Dakota Democratic-NPL to provide evidence to support its claim, and we received this explanation: “To vote in North Dakota, a person must have a valid North Dakota ID. To have a valid North Dakota ID, a person must establish proof of ND residency. States require people to have a license to hunt or fish. In many states, the government offers different licenses to residents and nonresidents. In some states, if a person buys a resident license and then establishes residency in another state, the resident hunting license is void.”

That much is true — in order to vote in North Dakota, you must show ID with proof of residency, and many states don’t allow you to have a resident hunting permit if you are not, in fact, a resident.

But it’s not true that there is any direct link between casting a vote in North Dakota and forfeiting a hunting license in another state.

We talked to an elections specialist in the North Dakota Secretary of State’s office, Lee Ann Oliver, and she told us that not only is there no mechanism by which her office would notify another state about a voter casting a ballot, there would be no way for her office to know what state a given voter had come from.

In North Dakota, you don’t have to register to vote; you can just show up to the polls with an ID that proves you’re a resident in order to cast a ballot. So, there is nothing tied to your voting record that would indicate whether or not you had lived in another state or have a hunting license in another state.

Since one common form of ID used to vote is a driver’s license, we also talked to a spokeswoman for the North Dakota Department of Transportation, Jamie Olson, who told us that when someone comes to North Dakota from another state, he or she has to hand over the out-of-state license and the DoT notifies that state that the license is no longer valid. The DoT does not contact any state agencies that would issue hunting licenses, though. 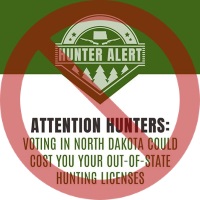