A viral meme falsely attributes a quote supportive of President Donald Trump to movie star Kurt Russell. The actor’s representative has debunked it before.

A number of similar pro-President Donald Trump Facebook pages, seemingly in concert, posted a meme this week that spreads a quote falsely attributed to the actor Kurt Russell.

Collectively, the meme accrued thousands of shares — positioning the star actor as a devout and outspoken supporter of the president — even though Russell never made the alleged statement, previously debunked by PolitiFact and the Associated Press.

A representative for Russell told the Associated Press last month that Russell did not say it. 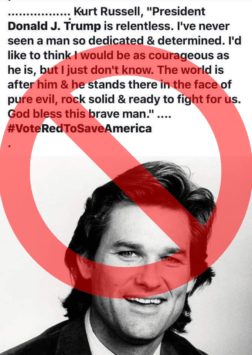 “President Donald J. Trump is relentless. I’ve never seen a man so dedicated & determined,” the quote reads. “I’d like to think I would be as courageous as he is, but I just don’t know. The world is after him & he stands there in the face of pure evil, rock solid & ready to fight for us. God bless this brave man.”

The meme, complete with a black-and-white headshot of a younger Russell, includes “#VoteRedToSaveAmerica.”

The quote and photo were shared in a popular Facebook post last month, which sourced it to a pro-Trump Twitter user who uses a photo of Russell as the profile picture.

Bogus celebrity quotes and rumors have remained fixtures in the landscape of political falsehoods. And it’s not the first time Russell was targeted.

In 2016, a doctored photo was made to look as if Russell and partner Goldie Hawn were sporting pro-Trump T-shirts, as Snopes reported at the time. In reality, Hawn publicly declared her support for Hillary Clinton in the 2016 presidential election.

Russell, who identifies as a libertarian, said in a 2015 interview that he prefers not to use his platform to talk about politics.

“I have my political point of view, of course; I’m an American and I’m entitled to it,” he told the Daily Beast. “But I don’t like espousing it publicly.”

Clinch, Matt and Tania Bryer. “Goldie Hawn on Hillary Clinton and not being married to Kurt Russell for 33 years.” CNBC. 28 Sep 2016.