Former President Barack Obama was sworn into office in 2013 with his hand on two Bibles. He did not use a Quran, as a meme circulating online falsely claims.

Former President Barack Obama used two Bibles when he was sworn into office for his second term.

One had belonged to Dr. Martin Luther King Jr. and the other had been used by Abraham Lincoln at his swearing-in ceremony in 1861. Obama also had used the Lincoln Bible for his first inauguration in 2009.

But a meme is circulating online with a picture of Obama taking the oath of office in 2013 with this text: “For those who don’t believe Obama is a Muslim, the red book is the Quran.”

That’s wrong. It’s not a Quran. The book bound with a red velvet cover is the Lincoln Bible. That’s the same one President Donald Trump used for his 2017 inauguration, along with a Bible that his mother had given him.

Obama has been falsely identified as a Muslim for more than a decade. We wrote about a similar claim in 2008 when he was seeking his first term as president. At that time, a chain email going around claimed that Obama took his oath of office for the U.S. Senate using a Quran. That wasn’t true, either.

There is no requirement that presidents use a Bible when they take the oath of office. The only thing that the Constitution requires is the oath itself. George Washington started the tradition of using a Bible to take the oath at his first inauguration in 1789, but not all presidents have used one. John Quincy Adams, for example, took the oath on a book of law in 1825.

FactCheck.org Rating:
False
“For those who don’t believe Obama is a Muslim, the red book is the Quran.”
Viral meme
- 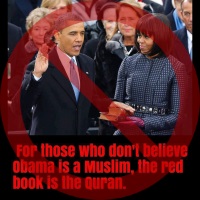