The U.S. Census Bureau officially estimates that close to 1 million fewer people were in poverty in 2017 compared with 2016. President Donald Trump called the decline “a record,” but it’s not.

Trump made his statement about poverty when he signed an executive order creating the White House Opportunity and Revitalization Council, which intends to focus on private and public investment in low-income communities.

“Last year alone, we lifted 1 million Americans out of poverty, which is a record,” Trump said in his Dec. 12 remarks.

But that’s not a record, and the White House didn’t respond when we asked for an explanation.

There were at least 16 years when the estimated number in poverty declined by 1 million or more, as the chart below shows. 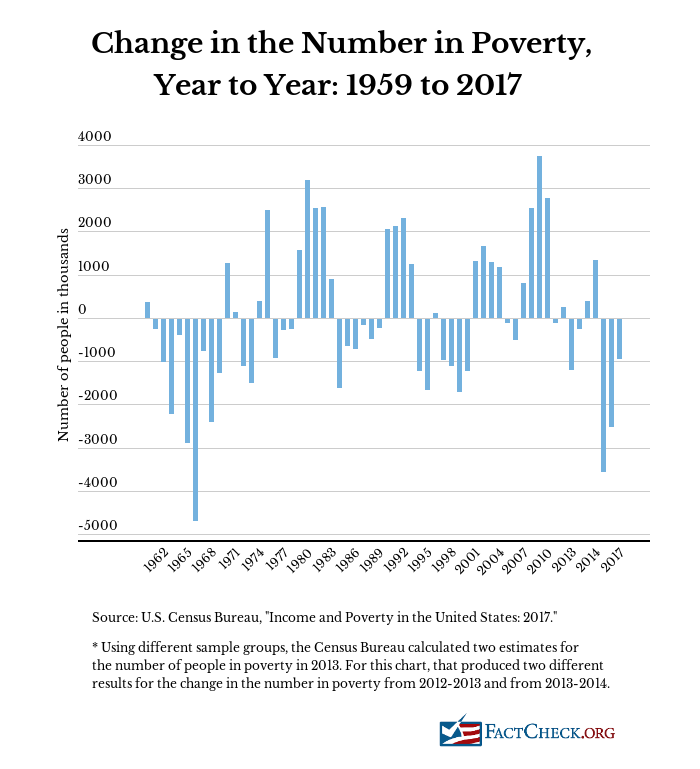 In fact, the Census Bureau noted that the 2017 estimate “was not statistically different from the number in poverty in 2016.” As the bureau explains, that means the difference between the two estimates “is likely due to chance” rather than being “statistically significant,” which “likely represents a true difference that exists in the population as a whole.”

FactCheck.org Rating:
False
"Last year alone, we lifted 1 million Americans out of poverty, which is a record."
Donald Trump
President of the United States
https://www.whitehouse.gov/briefings-statements/remarks-president-trump-signing-executive-order-establishing-white-house-opportunity-revitalization-council/