A photo of two people, one of whom is in blackface, has been circulating online for years with the unfounded claim that it shows Bill and Hillary Clinton. A Twitter user said he posted the photo in 2015, even though he had no evidence it was the Clintons, to “stir interest.”

The confessions of politicians who once dressed in blackface have been littering the headlines recently, which has led to a heap of phony claims on social media that Hillary Clinton was once pictured in blackface.

Snopes first debunked that claim when the picture of two people, apparently at a costume party, began circulating widely online in early 2016.

“I didn’t believe it was them,” Tourville said. “I never proffered that it was.” He said that he found the photo online and downloaded it a couple of years before he posted it thinking that it was “collectable.” Tourville dislikes the Clintons and supported Bernie Sanders when he ran against Hillary Clinton in the 2016 Democratic primary.

Although Tourville didn’t believe that the photo showed the Clintons, he thought it looked similar enough to them that it might stir up some reaction. “It was close enough that it would be a pebble in still water — it would put out ripples,” Tourville said.

He was right. The photo has been shared thousands of times, once prompting an apology from a surrogate for Donald Trump who retweeted it during the campaign.

The man in the picture does look similar to a young Bill Clinton, but, as Tourville said, “The guy’s face looked too finely boned, more finely boned than Bill.”

FactCheck.org Rating:
False
A viral image shows a person in blackface with the claim that it is Hillary Clinton.
Viral image
- 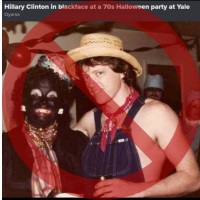