A meme with misinformation about Medicare eligibility and cost has been shared almost 500,000 times on Facebook.

The claim, posed in the form of a question, has been shared 493,000 times and says: “Why do Seniors on Social Security have to pay for Medicare and a Supplemental Ins. And the illegals get it all for free?”

First of all, Medicare isn’t available for people living in the U.S. illegally. It is available only to citizens and lawful permanent residents who have lived in the U.S. continuously for at least five years and meet the other criteria, such as being at least 65 and having paid Medicare payroll taxes.

Secondly, most seniors don’t have to pay for basic Medicare coverage. There are four parts to Medicare — the most basic is Medicare Part A, which covers inpatient stays at hospitals and nursing facilities. It is funded largely through payroll taxes, and those who paid into the system for at least 10 years, or are married to someone who paid into the system, don’t pay premiums.

Recipients can purchase additional coverage for doctors’ visits and outpatient care through Medicare Part B (which is priced on a sliding scale that depends on income) or through a private insurance provider. Most people who receive Social Security benefits and use Medicare Part B pay $130 per month, which is slightly less than the $135.50 monthly premium for the plan in 2019.

Not only is the factual basis for the question posed in the meme incorrect, but its suggestion that people in the U.S. illegally are a drain on the Medicare system is backwards.

According to a 2015 study in the Journal of General Internal Medicine, those living in the U.S. illegally provide a net contribution to the trust fund that largely pays for Medicare Part A. From 2000 to 2011, such immigrants contributed a net total of $35.1 billion to the trust fund, according to the study, which was led by Leah Zallman, an assistant professor of medicine at Harvard Medical School, for the Massachusetts-based nonprofit Institute for Community Health.

FactCheck.org Rating:
False
"Seniors on Social Security have to pay for Medicare and a Supplemental Ins. And the illegals get it all for free."
Viral meme
- 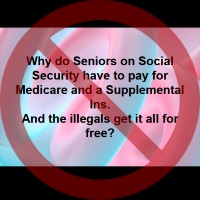