A viral meme has revived an old, baseless conspiracy theory claiming that Hillary Clinton is linked to the Oklahoma City bombing.

An old conspiracy theory from the 1990s has gotten a 21st Century update — it’s now spreading on Facebook as a meme.

The theory suggests that then-first lady Hillary Clinton was involved in the 1995 Oklahoma City bombing. In all, 168 people died after anti-government extremist Timothy McVeigh detonated a homemade bomb that was inside of a rented truck that he parked outside of the Alfred P. Murrah Federal Building in downtown Oklahoma City.

The claim, which has been around since the bombing happened, has now been distilled into a meme with a picture of the aftermath of the blast that says: “Reminder: This building in Oklahoma City was blown up and destroyed just 4 days before Hillary Clinton was to be indicted in the Whitewater scandal. All documents lost!”

But there is no evidence to support that claim.

It’s true that Bill and Hillary Clinton were investigated in the 1990s for their involvement in a failed real estate development project known as Whitewater, but there’s no indication that Hillary Clinton was going to be indicted four days before the bombing happened. In fact, she was interviewed as part of the Whitewater investigation three days after the bombing occurred.

After the bombing, the couple who had invested in Whitewater with the Clintons, Jim and Susan McDougal, were indicted and convicted on charges for financial transactions that weren’t related to the development deal, but were uncovered during the course of the investigation.

Those charges were filed in the Eastern District of Arkansas, near where the Whitewater property was located.

Government officials denied that any documents related to the Whitewater investigation were located in the Oklahoma City building that was bombed, according to a 1995 Washington Post article about such conspiracy theories.

There was no mention in that report of the Department of Justice having offices in the Murrah building.

Final Report of the Independent Counsel in Re Madison Guaranty Savings and Loan Association. GPO. 5 Jan 2001.

FactCheck.org Rating:
False
"Reminder: This building in Oklahoma City was blown up and destroyed just 4 days before Hillary Clinton was to be indicted in the Whitewater scandal. All documents lost!"
Viral meme
- 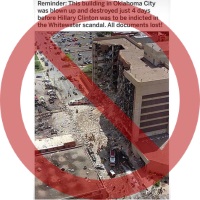