A story satirizing Rep. Alexandria Ocasio-Cortez’s Green New Deal has been turned into a meme that is circulating without a satire disclaimer. She did not say she wants to repeal daylight saving time because of climate change.

Rep. Alexandra Ocasio-Cortez introduced the Green New Deal — a nonbinding resolution aimed at curbing climate change and creating jobs — during her second month in Congress and it’s attracted a lot of attention.

It’s also been the subject of misinformation, which we’ve written about.

Recently, it was satirized on a website called NPCdaily.com, which labels each story as satire and says on its “About” page, “NPC Daily is a satire site, providing political and cultural commentary with wanton sarcasm. NPC Daily pokes fun of modern journalism and liberalism.”

The site posted a story with a headline saying that Ocasio-Cortez “opposes daylight savings time because ‘the extra hour of sunlight drastically speeds up climate change.'” It claimed that, as part of her discussion of the Green New Deal, she had called for immediately doing away with daylight saving time. “If we change our times with the sole intent of increasing the amount of daylight we receive, that’s an extra hour of sun shine that will warm the planet,” the story said, using a made-up quote attributed to Ocasio-Cortez.

In reality, the only thing the congresswoman appears to have said publicly about daylight saving time was in a tweet reminding people to change their clocks.

Regardless of the multiple satire disclaimers on NPCdaily.com, the story is still being shared on Facebook as though it’s legitimate news, and it has been turned into a meme that features Ocasio-Cortez’s picture and the made-up quote.

“The idea was never actually to get people to believe it,” said Michael Diaz, who started NPCdaily.com in October 2018. But “people will always be taking things out of context.”

Diaz started the site because he saw an open niche for satire aimed at liberal politicians and issues and, he said, “because I wanted to have a laugh.” Under no circumstances would he want his content to cause people to be attacked or harassed, Diaz said.

On the issue of posts from his site circulating as though they are real, Diaz said, “If people see my stuff and then they think that it’s true, that’s kind of on them.” He said part of being a responsible citizen is doing research before believing something posted online. 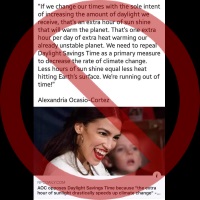