A viral meme has paired old misrepresentations of the Quran with a picture of Rep. Ilhan Omar.

A handful of distorted quotes from the Quran have been circulating on blogs and anti-Islamic websites for years, but their exposure recently surged when they were paired with a picture of Rep. Ilhan Omar of Minnesota in a meme.

That meme has been shared more than 50,000 times on Facebook alone.

It says that the Quran is Omar’s “daily Bible,” but the interpretations of the verses it quotes don’t come from any translation of the Quran we could find. Rather, they appear to have come from a 2005 post on a website called Islam Watch, which explains on its “About Us” page that it was started by six former Muslims. The site says they “felt it incumbent upon us to make the non-Muslim world aware of the reality of Islam, and undertake timely precautionary measures against this religion of terror, hatred and mayhem.”

The interpretations of nine verses from the Quran that the meme includes were made by one of the founders of the site, who describes himself as a freelance writer, not a religious scholar. In total, he had offered 36 reinterpretations of verses from the Quran. Several of them have been repeated in online publications since then, illustrating how misinformation persists for years and spreads online.

The writer, Abul Kasem, did not respond to an email seeking comment.

One of the problems with the meme is that the interpretations it gives lack historical and textual context. Joseph Lowry, an associate professor of Arabic and Islamic studies at the University of Pennsylvania, explained to us some of the history that helped to form the Quran and how the meaning of the verses can be distorted out of context. Muhammad, the founder of Islam, was persecuted, at least in part, for his religious message and had to flee his home in Mecca for the nearby town of Medina. There, he and his followers remained in conflict with the Meccans, and those struggles are referenced in the Quran.

Two chapters — called surahs in the Quran — out of a total of 114 discuss most directly this political and military conflict with the Meccans. They are surahs eight and nine, and two-thirds of the verses in the meme come from them.

We went through the nine interpretations that are included in the meme with Lowry and compared them with an online resource from the University of Leeds that draws from some common English translations of the Quran.

Here’s how the meme’s language compares with those sources for each surah and verse it claims to quote:

As with many historic texts, the Quran can be challenging to translate, and reasonable minds can differ about how best to do it. But Lowry concluded that some of the interpretations given in the meme are mistranslated, and all of them are taken out of context. “It’s designed to be inflammatory when presented and translated like this,” he said.

FactCheck.org Rating:
Out of Context
A meme that asks "When will liberals check out the Quran?" lists nine supposed quotes from the Muslim holy book.
Viral meme
- 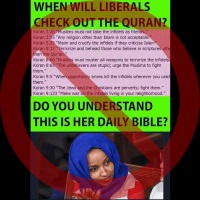