Joe Biden distorted the facts when he asserted that the auto industry thought the Obama administration’s fuel standards were “a good idea” and that automakers “didn’t even agree” with President Donald Trump’s proposal to roll them back.

Auto executives begrudgingly accepted the higher fuel standards adopted by the Obama administration back in 2011. They have repeatedly implored Trump to revisit and relax those standards, arguing that the current market makes the higher standards unfeasible and could cost more than a million jobs.

It’s true that automakers have not publicly embraced Trump’s plan to freeze the fuel standards, but the industry’s reticence is mostly tied to the administration’s failure to reach an agreement with California to provide uniform, nationwide fuel standards.

The former vice president, who is running for the Democratic presidential nomination, made his comments about auto industry support for ambitious Obama administration fuel economy standards — which would require autos achieve an average of 54.5 miles per gallon across all vehicles by 2025 — during a campaign speech in Philadelphia on May 18.

Biden, May 18: The automobile industry, they agreed when Barack and I came along and said, “We’re gonna double the CAFE [Corporate Average Fuel Economy] standards.” They thought it was a good idea. They didn’t even agree with the president [Trump] when he rolled it back. What in God’s … who’s he trying to please?

To be clear, the automobile industry has never been thrilled with federally mandated fuel efficiency standards. But in 2011, automobile manufacturing executives reluctantly agreed to the proposal by Obama to nearly double fuel economy standards by 2025.

Support for the Obama/Biden Plan

In 2009, the flailing auto industry was the beneficiary of a massive government bailout. When Obama proposed the higher fuel standards, Brett Smith of the Center for Automotive Research told us, it was “not politically acceptable” to publicly oppose the administration’s plan.

Auto industry executives “were not in a good bargaining position,” Smith, the director of CAR’s Propulsion Technologies & Energy Infrastructure Group, said. The Obama administration “had the auto industry over the barrel.”

That led to what Smith calls an “awkward” event in which auto executives attended Obama’s announcement of the new fuel standards to publicly show their support for the plan. At the announcement, executives from Ford, GM, Chrysler, BMW, Honda, Hyundai, Jaguar/Land Rover, Kia, Mazda, Mitsubishi, Nissan, Toyota and Volvo flanked Obama onstage at the Walter E. Washington Convention Center in Washington, D.C.

“The companies here today have endorsed our plan to continue increasing the mileage on their cars and trucks over the next 15 years,” Obama said on July 29, 2011. “We’ve set an aggressive target, and the companies here are stepping up to the plate. By 2025, the average fuel economy of their vehicles will nearly double to almost 55 miles per gallon. So this is an incredible commitment that they’ve made. And these are some pretty tough business guys. They know their stuff. And they wouldn’t be doing it if they didn’t think that it was ultimately going to be good business and good for America.”

The executives seated next to Obama may have been smiling, but it was apparently through gritted teeth, automobile industry experts said.

A New York Times story at the time of the announcement noted that auto executives only four years earlier aggressively opposed higher fuel economy standards. The industry’s “meek acceptance” of the higher fuel standards proposed by the Obama administration came two years after “the $80 billion federal bailout of General Motors, Chrysler and scores of their suppliers, which removed any itch for a politically charged battle from the carmakers,” the article said.

“Detroit was faced with an undeniable political reality: there was no graceful way to say no to an administration that just two years ago came to its aid financially,” the New York Times wrote.

The auto industry also had won an important escape clause, an agreement for a “midterm review” in which the feasibility of the ambitious fuel efficiency standards would be revisited by April 2018. But in the waning days of the Obama administration, the Environmental Protection Agency expedited its decision on the midterm review and locked in the higher fuel standards through 2025.

Trump’s EPA Administrator Scott Pruitt later reopened the decision on the review saying, “Obama’s EPA cut the Midterm Evaluation process short with politically charged expediency, made assumptions about the standards that didn’t comport with reality, and set the standards too high.”

The auto industry vigorously opposed the Obama administration’s handling of the midterm review.

On Feb. 12, 2017, less than a month into Trump’s presidency, Reuters reported that the CEOs of 18 major automakers “urged President Donald Trump to revisit a decision by the Obama administration to lock in vehicle fuel efficiency rules through 2025.” In a letter, the executives warned the rules could “threaten future production levels, putting hundreds of thousands and perhaps as many as a million jobs at risk.”

The Obama fuel standards “threaten to depress an industry that can ill afford spiraling regulatory costs,” wrote Mitch Bainwol, president and CEO of the Alliance of Automobile Manufacturers. “If left unchanged, those standards would cause up to 1.1 million Americans to lose jobs due to lost vehicle sales. And low-income households would be hit the hardest.”

In a personal meeting with the president, Ford CEO Mark Fields told Trump about a million jobs “could be at risk if we’re not given some level of flexibility on that — aligning it to market reality.” Fields said he did not ask to have the standards eliminated, though he did not say specifically what level was more appropriate.

“We think having one national standard on fuel economy is really important,” Fields added, according to a Jan. 28, 2017, story in Automotive News.

Indeed, much has changed in the automobile industry in the years since Obama announced the higher fuel standards. When Obama made his announcement in July 2011, gas was about $3.70 a gallon, and expected to go higher. Today, however, gas prices are about 80 cents per gallon cheaper.

In the meantime, sales of sport utility vehicles have skyrocketed, while the market for more fuel-efficient cars has declined.

“The EVs [electric vehicles] are not selling well, and neither are the hybrids,” Michelle Krebs, a Detroit-based senior analyst for Autotrader who has been writing about the automotive industry for 35 years, told us in a phone interview. “They are making them, but people aren’t buying them. [Auto manufacturers] lose money on every single one. The consumer demand is just not there.”

In August 2018, the Trump administration proposed freezing the fuel standards at about 37 miles per gallon.

Though automakers lobbied the Trump administration to ease the standards, they have not publicly embraced the administration’s proposed rollback, largely because it is expected to be challenged by California and other states in court, and could result in a “split-market” that “would be a logistical and financial nightmare” for auto manufacturers, the New York Times said.

As we explained in our story “The Facts on Fuel Economy Standards,” the U.S. fuel economy program includes two standards that are overseen by different agencies under different laws: The Corporate Average Fuel Economy, or CAFE, standard is set in miles per gallon by the Department of Transportation’s National Highway Traffic Safety Administration, and greenhouse gas emissions standards, which limit emissions of carbon dioxide, are monitored by the Environmental Protection Agency.

Under Obama, NHTSA and EPA worked together to set standards that would be essentially equivalent to each other. The agencies also collaborated with the state of California, which had been allowed to set a stricter standard under the Clean Air Act, so that the state would accept the federal standards, thereby creating a so-called “national program.”

In February, however, the Trump administration broke off talks with California officials over a compromise, likely setting up a court challenge to the administration’s proposed rollback of the standards.

The Washington Post reported that Joe Hinrichs, Ford’s president of global operations, issued a statement saying that “the company is ‘disappointed’ that California and federal regulators have not been able to find a compromise on future fuel efficiency standards.”

“A coordinated program with every stakeholder is in the best interest of Ford’s customers, and is the best path forward to achieve reductions in carbon dioxide emissions and support critical investments in new technologies,” the statement said. “The auto industry needs regulatory certainty, not protracted litigation.”

The car companies are in a tough position, said Smith, of the Center for Automotive Research. Automakers don’t want to be seen as anti-environmental, Smith said, so they appear to want a nationwide fuel standard somewhere in between the current regulations and Trump’s proposal.

“Clearly, they think they need relief [from the Obama standards],” Smith said. “The question becomes, what are they asking for specifically?”

The Washington Post noted that the Auto Alliance, whose members make most of the vehicles in the U.S., “has continued to voice concerns about the administration’s approach. Auto Alliance spokeswoman Gloria Bergquist said in an interview [March 7] that the group supports ‘year-over-year increases in fuel economy’ and a nationwide standard that includes California and its affiliated states.”

All of that nuance is lost in Biden’s summary.

The auto industry publicly supported the Obama standards back in 2011, though it’s debatable whether they thought the standards were a “good idea,” as Biden put it. Industry experts told us auto executives hoped to revisit the standards through a midterm review in 2018, when they might be in a better negotiating position. Those executives have made clear that they believe it is necessary to ease the fuel economy standards mandated in the Obama plan.

Biden’s claim that auto manufacturers “didn’t even agree with [Trump] when he rolled it back,” also ignores the context of the auto industry’s misgivings about the Trump plan. Auto executives do not oppose weakening the Obama standards, but they had hoped for a compromise standard that would be palatable to California and other states, and avoid the likelihood of lengthy court battles. 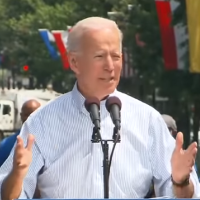