On the eve of the latest round of U.S.-China trade talks, President Donald Trump said that the U.S. collects “over $100 Billion a year in Tariffs.” The U.S. collected $41 billion in fiscal year 2018, and has collected $34.7 billion through the first six months of this fiscal year.

The nonpartisan Congressional Budget Office projects that the U.S. will collect $74 billion in fiscal year 2019.

The president appeared to be counting additional revenue that would come to the U.S. if, as threatened, he goes ahead with a plan to raise tariffs on roughly $200 billion worth of Chinese goods from 10 percent to 25 percent. Depending how long a new round of tariffs would stay in effect, the U.S. could collect “over $100 Billion a year” in tariff revenue in future fiscal years.

Trump made his remarks about tariff revenue in a tweet on May 8 — a day before Chinese Vice Premier Liu He is expected to arrive in the U.S. for trade talks.

….Guess what, that’s not going to happen! China has just informed us that they (Vice-Premier) are now coming to the U.S. to make a deal. We’ll see, but I am very happy with over $100 Billion a year in Tariffs filling U.S. coffers…great for U.S., not good for China!

As for tariff revenue, the U.S. collected $41.3 billion in customs duties in fiscal year 2018, according to the Treasury Department. In its summary of fiscal year 2018, the nonpartisan Congressional Budget Office said, “Customs duties rose by $7 billion (or 19 percent), in part because of new tariffs imposed by the [Trump] Administration during the year.”

As we have written, the Trump administration last year imposed tariffs on $250 billion worth of Chinese goods, and China responded with tariffs on $110 billion of U.S. goods. The two countries have been trying to negotiate a trade agreement ever since.

In his tweet, Trump said it remains to be seen what happens in the trade talks, but “I am very happy with over $100 Billion a year in Tariffs filling U.S. coffers.” With the current tariffs imposed by the Trump administration, the CBO projects revenues from customs duties to reach $74 billion this fiscal year.

The CBO projection of $74 billion for the current fiscal year seems to be right on track. So far, the U.S. has collected $34.7 billion through the first six months of this fiscal year, according to the most recent monthly statement of revenues and outlays issued by the Treasury Department. 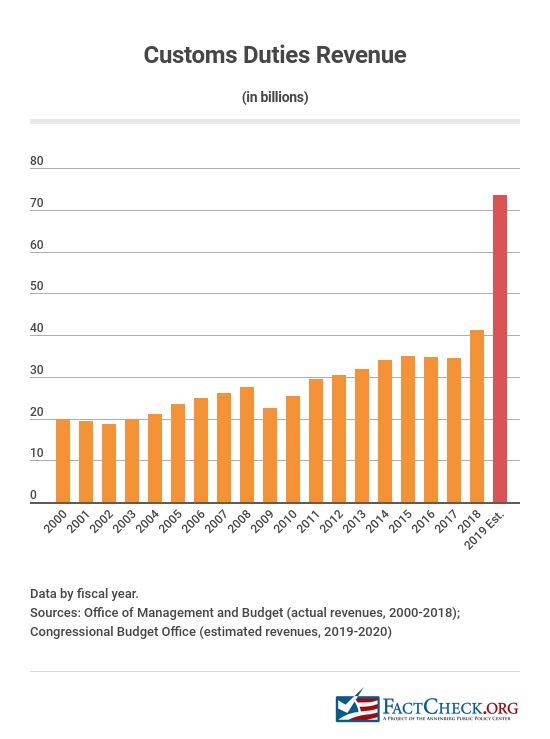 As the chart illustrates, the tariffs imposed on Chinese goods by the Trump administration have increased revenue. That’s because tariffs on Chinese imports account for a disproportionate share of customs duties revenue.

The U.S. collected about $23 billion in tariffs on Chinese goods in calendar year 2018 — far more than any other country, according to the U.S. International Trade Commission DataWeb, which uses data from the U.S. Census Bureau. The amount collected on Vietnamese goods was the second highest, but it was less than $4 billion, according to USITC DataWeb.

Correction, May 14: One of our readers noted that the $100 billion figure in Trump’s May 8 tweet was most likely referring to future annual tariff revenue, including the higher tariffs that the administration put in place on May 10. We agree. A day after our story ran, the president discussed raising tariffs and spoke about annual tariff revenues in the future tense: “We’ll take in well over $100 billion a year.” That could turn out to be correct, depending how long the additional tariffs remain in place. The tweet, however, was in the present tense, and the U.S. does not collect more than $100 billion in tariffs. As a result, we’ve updated this item to add that the president appeared to be counting additional revenue from the possibility of raising tariffs, and we have removed a reference to the president’s statement being “false.” We also changed the headline, which originally read, “Trump Exaggerates Tariff Revenue.”