As U.S. trade talks with China drag on, President Donald Trump falsely claimed that the U.S. has “never taken in 10 cents from China” in tariffs, but “now we’re taking in billions and billions of dollars.” The U.S. has collected billions in customs duties on Chinese imports for years, although the amount has increased greatly since the trade war with China began.

Trump also exaggerated the total trade deficit with China, as he has been doing for years.

The U.S. and China have been trying to negotiate a trade agreement since last year, when Trump initiated a trade conflict with China by imposing tariffs on $250 billion worth of Chinese goods. China responded with tariffs on $110 billion of U.S. goods.

U.S. Trade Representative Robert Lighthizer and Treasury Secretary Steven Mnuchin traveled to Beijing last week for the latest round of trade talks, and Chinese Vice Premier Liu He is expected in Washington this week.

“Ambassador Lighthizer and I just concluded productive meetings with China’s Vice Premier Liu He. We will continue our talks in Washington, D.C. next week,” Mnuchin tweeted on May 1.

Two days later, at a bilateral meeting with the prime minister of the Slovak Republic, Trump spoke about the status of the ongoing trade talks with China.

The president distorts the facts about tariffs — again. As we have written before, tariffs are paid by U.S. importers in the form of customs duties, and to some extent by U.S. consumers in the form of higher prices. They are not paid by China. In an interview that aired May 7 on NPR, former White House economic adviser Gary Cohn said: “For every dollar of tariff that’s collected, it’s coming out of disposable income of the United States consumer today.”

This time, the president compounded his false claim by stating that the U.S. has “never taken in 10 cents from China, and now we’re taking in billions and billions of dollars.”

In fact, the U.S. has collected billions in tariffs on Chinese imports for years. Below is a chart we created from the U.S. International Trade Commission DataWeb, which uses data from the U.S. Census Bureau. 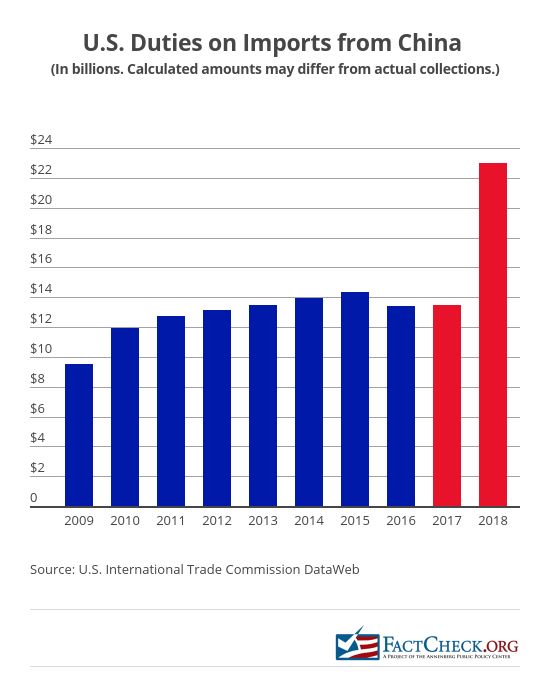 As the chart shows, tariff revenue has increased substantially as a result of the increased tariffs on Chinese imports — up 70 percent in 2018 over the previous calendar year. But revenue was already in the billions before Trump took office — contrary to the president’s claim.

Trump also claimed that the increased tariffs he has imposed on China have “had a very positive effect on things.” It is true that the increase has raised more in revenue, as we’ve shown. However, China’s retaliatory tariffs on U.S. agricultural and food products threaten to reduce the U.S. agricultural trade surplus in fiscal year 2019 to the lowest level since 2007, partly because of “significant declines in projected exports to China,” according to the U.S. Department of Agriculture’s Economic Research Service.

China has placed tariffs on more than 800 U.S. products, “including soybeans, pork, dairy products, fruits and nuts, seafood, and processed products,” according to the nonpartisan Congressional Research Service.

“China has fallen from the leading export market for U.S. agricultural products in FY2017 to the third-leading export market in FY2018 due to the retaliatory tariffs, according to the U.S. Department of Agriculture (USDA). USDA forecasts that China will fall to the fifth-leading market for those products in FY2019,” CRS said in a Dec. 31, 2018, report.

The report goes on to say: “In November 2018, USDA forecast that U.S. agricultural and food exports to China would decline to $9 billion in FY2019 from $16.3 billion in FY2018 and $21.8 billion in FY2017, citing reduced exports due to the ‘trade tensions’ between the United States and China.”

Trump has expressed concern in recent days about the pace of negotiations with China. On May 5, Trump threatened to impose more tariffs on China, complaining that the trade talks have moved “too slowly.”

A day later, Trump falsely tweeted: “With China we lose 500 Billion Dollars.” Trump commonly distorts the facts about trade deficits. In fact, the U.S. had a total trade deficit with China in goods and services of nearly $379 billion in 2018. The U.S. had a deficit in goods of about $419 billion with China, but that was offset by a $40.5 billion trade surplus in services.

In his remarks on May 3, the president also said this about the European Union: “We’re losing $181 billion a year. We have been for many years.” The U.S. had a $110 billion total deficit in goods and services with the EU in 2018, up 20 percent since Trump took office. The U.S. deficit in goods was $170 billion, but the U.S. had a $60 billion surplus in services.