A meme making the bogus claim that the U.S. Constitution confers rights only to citizens is circulating online. Actually, many of the rights granted in the Constitution apply to noncitizens, too.

Many provisions in the U.S. Constitution apply to everyone in the country — citizens and noncitizens, alike.

A popular meme, however, is circulating online with this false claim: “The entire US Constitution was written for Americans only. It’s not the World Constitution, it’s the US Constitution. NON-CITIZENS AND CRIMINALS DO NOT POSSESS RIGHTS UNDER THIS DOCUMENT.”

Some parts of the Constitution apply only to citizens, but the bulk of the document applies to everyone, said Kermit Roosevelt, a professor and constitutional expert at the University of Pennsylvania Law School.

The word “person” actually appears much more frequently than the word “citizen” in the Constitution, including the Bill of Rights (which contains the first 10 amendments) and the other 17 amendments.

“That’s a deliberate choice,” Roosevelt said, referring to the inclusion of noncitizens.

While it’s true that the Constitution was designed to benefit the U.S. and its people, that goal is accomplished in part by extending rights to citizens of foreign countries so that the same fair treatment would be conferred to American citizens abroad. In short, it generates international cooperation, Roosevelt said.

“The idea that the interests of the United States or the American people are best served by not granting rights to non-citizens is incredibly dangerous and shortsighted,” he said. “The founders were smarter than that.”

There is also extensive Supreme Court precedent recognizing the rights of noncitizens under the Constitution. In one seminal 1886 case on the issue, for example, the Supreme Court said:

Yick Wo v. Hopkins, May 10, 1886: The Fourteenth Amendment to the Constitution is not confined to the protection of citizens. It says:

“Nor shall any State deprive any person of life, liberty, or property without due process of law; nor deny to any person within its jurisdiction the equal protection of the laws.”

These provisions are universal in their application to all persons within the territorial jurisdiction, without regard to any differences of race, of color, or of nationality, and the equal protection of the laws is a pledge of the protection of equal laws.

As for the meme’s other claim that criminals don’t have rights under the Constitution, Roosevelt called it “preposterous.”

In fact, the Fourth, Fifth, Sixth, and Eighth amendments directly address the rights of those accused of a crime.

One of the Facebook groups that shared the meme includes on its “about” page this disclaimer: “Some of the stuff we post here may not be totally factual or accurate (if at all) and might even be considered ‘fake news’.” But another Facebook page that shared the same text in a different meme has only this written on its “about” page: “This group was created for the sole purpose of helping out President Trump, The People’s President Make America Great Again and to share the truth.”

In both cases, though, the information shared in the meme is false.

The Constitution of the United States. National Archives. Accessed 10 Jun 2019.

FactCheck.org Rating:
False
"The entire US Constitution was written for Americans only. It's not the World Constitution, it's the US Constitution. NON-CITIZENS AND CRIMINALS DO NOT POSSESS RIGHTS UNDER THIS DOCUMENT."
Viral meme
- 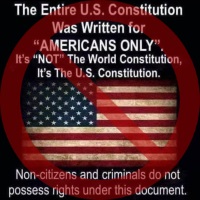