In remarks to the press in Iowa and before departing for Iowa, President Donald Trump talked about ongoing trade negotiations with China, and the possibility of enacting further tariffs. But Trump distorted the facts on several points:

As the president was about to fly off to a June 11 campaign event in Iowa, reporters pointed out that Democratic presidential candidate Joe Biden also would be speaking in Iowa, and that the former vice president planned to talk about the need to “get tough” with China. Trump called Biden “a dummy” and compared his record on China to that of the Obama administration. But some of the president’s points strayed from the facts.

U.S. vs. China Net Worth

In recent interviews, the president has repeatedly cited net worth statistics to claim that while the U.S. is prospering, China is headed in the other direction.

“I’ve created something,” Trump told reporters prior to departing for Iowa on June 11. “What we’ve done in the last two and a half years, we’ve picked up $14 trillion in net worth of the United States.  And China has gone down probably by $20 trillion.  There’s a tremendous gap.  When I came in, that gap was getting very close.”

Trump’s figures on the growth of America’s net worth are on the mark, according to data kept by the Federal Reserve. As for the claim that over the same period, China’s net worth “has gone down probably by $20 trillion,” economists we spoke to said they weren’t aware of any data that shows that.

Although there is no directly comparable data for national net worth for China, Credit Suisse’s annual analysis of total household wealth shows that China’s went up nearly $5.3 trillion between the end of 2016 and the middle of 2018, the latest data available.

If China’s total wealth or net worth has dropped since then, economists we spoke to said they aren’t aware of such publicly available data, and they said a precipitous drop of $20 trillion is highly unlikely. We reached out to the White House press office for clarification but did not hear back.

Trump has cited the net worth statistic several times in recent days.

And had Democratic nominee Hillary Clinton won the 2016 presidential election, he said, “I would say China right now would be far ahead of the United States, just think of it. China would have been — we are now so far ahead of China, it’s not even a contest.”

And in a June 10 interview on CNBC’s “Squawk Box,” Trump again boasted about the U.S. net worth relative to China’s.

“You know, we’ve picked up trillions of dollars in worth since I’ve been elected,” Trump said. Later, he added, “Look, I said it before, we picked up $10 trillion more than that in value. And they’ve lost $15 to $20 trillion in value since the day I was elected. We are doing great.”

Getting a handle on similar data for China is more difficult. Economists told us the U.S. government does not keep the same kind of net worth data for China, at least not publicly.

The Credit Suisse Research Institute annually publishes a Global Wealth Report and Global Wealth Databook in October that includes a breakdown of household wealth by country. That’s similar to — but not the same as — the net worth data kept by the Federal Reserve.

“There could conceivably be more recent estimates from other sources, but we are not aware of them at this time,” Jim Davies, an economics professor at the University of Western Ontario and one of the authors of the Credit Suisse report, told us via email.

Derek Scissors, a resident scholar at the American Enterprise Institute who focuses on the Chinese economy and U.S. economic relations with Asia, told us it is possible the government created a confidential wealth series for China. “But I don’t know about it and you’d think it would be made public if it shows what the President claims,” he told us. “Short of that, there is not an equivalent measurement of China’s net national wealth to what the Fed does.”

Using the Credit Suisse numbers — which are based on households only, and does not include public sector assets — “there is no way to get an outright drop in Chinese wealth of the magnitude the President has referred to,” said Scissors, who is concurrently chief economist of the China Beige Book. “Those would be enormous losses.”

“As usual, Trump seems pretty confused on this one,” Dean Baker, senior economist at the Center for Economic and Policy Research, told us via email. “I don’t know of any data source comparable to the Fed for China’s wealth, but we do know that real estate prices have risen a great deal over the last year. That would imply a large increase in wealth.”

Baker cautioned, however, that “the measure of wealth is not terribly meaningful, since we can change a form of ownership and raise measured wealth, even though the country is no wealthier. For example, Trump’s tax cut increased corporations’ after-tax profit and therefore increased stock wealth. But it did so at the expense of larger budget deficits, which are not in any way subtracted from our wealth figures. So, we can claim more wealth, but not in any way that is meaningful.”

“The President is correct that the absolute wealth gap has widened further in our favor, as of the latest available data from Credit Suisse, though ‘only’ by a few trillion dollars,” Scissors said. “I believe what the President is recalling is the growth trajectory China was on versus the one it’s on now. Using Credit Suisse data, if you take growth over the full period of the Obama administration and compare it to growth over the Trump administration, you get China underperforming its previous wealth trajectory a good deal.”

The Credit Suisse Global Wealth Report 2018 noted remarkable growth in China’s wealth since 2000. “This century, total wealth in China has risen from USD 3.7 trillion to USD 51.9 trillion, a multiple of more than 14,” the report states. “This is double the rate of any other nation and three times the rate of most.” But that growth has slowed considerably, beginning in 2014.

In an article penned in March, “U.S.-China: Who Is Bigger and When,” Scissors wrote, “After revising Chinese wealth sharply higher, Credit Suisse shows almost exactly a 50 percent increase from the end of 2012 to the middle of 2018. For the U.S., the gain is close, at 47 percent. Given the larger U.S. base, the U.S. has been pulling away in absolute terms for the past six years. At the end of 2012, the American wealth advantage was $32 trillion. In the middle of 2018, it was $46 trillion. The PRC [People’s Republic of China] is not going to catch America like that.”

Scissors projected that the pace of American and Chinese wealth growth will slow. “Without a return to reform, the ratio of American to Chinese household wealth will fall, but the absolute American advantage should remain about $30 trillion for the indefinite future.”

Trump, June 11: We’re also taking long-overdue steps to stand up to China’s chronic trade abuses. Have to do it. Somebody had to do it. They’ve been taking out of our country, for many years, 500 billion — with a “B” — billion dollars a year. And somebody had to say “no more.” And Obama-Biden didn’t say it. They just let it happen. And, in all fairness, so did other presidents. We’re stopping it. It’s stopped.

The trade deficit with China increased 20 percent between 2016 and the most recent 12 months on record, ending in March 2019.

In remarks at the White House that same day, Trump also repeated a false claim about tariffs that the U.S. levies on Chinese imports.

Trump, June 11: Right now, China is paying us billions and billions of dollars [in tariffs]. They never gave us 10 cents.

This is doubly wrong. First, as we have written, China doesn’t pay for the tariffs. Tariffs are paid by U.S. importers in the form of customs duties, and to some extent by U.S. consumers in the form of higher prices.

In a May 12 interview with host Chris Wallace on “Fox News Sunday,” Larry Kudlow, the top White House economic adviser, acknowledged that “both sides will pay” the cost of the higher tariffs.

Wallace, May 12: But, Larry, that isn’t true. It’s not China that pays tariffs. It’s the American importers, the American companies that pay what in effect is a tax increase and oftentimes passes it on to U.S. consumers.

Wallace: But the tariff on goods coming into the country, the Chinese aren’t paying.

Kudlow: No, but the Chinese will suffer GDP losses and so forth with respect to a diminishing export market and goods that they may need for their own —

Wallace: I understand that, but the president says that doesn’t — that China, it pays the tariffs, they may suffer consequences but it’s U.S. businesses and U.S. consumers who pay, correct?

Kudlow: Yes, to some extent. Yes, I don’t disagree with that. Again, both sides will suffer on this.

As we also have written, the U.S. has been collecting billions in tariffs on Chinese goods for years.

Prior to Trump becoming president, the U.S. collected $122.6 billion in customs duties from 2007 to 2016, or $12.3 billion a year on average, according to the U.S. International Trade Commission DataWeb. Last year, the U.S. collected nearly $23 billion — an increase that reflects the higher tariffs imposed on China by the Trump administration. 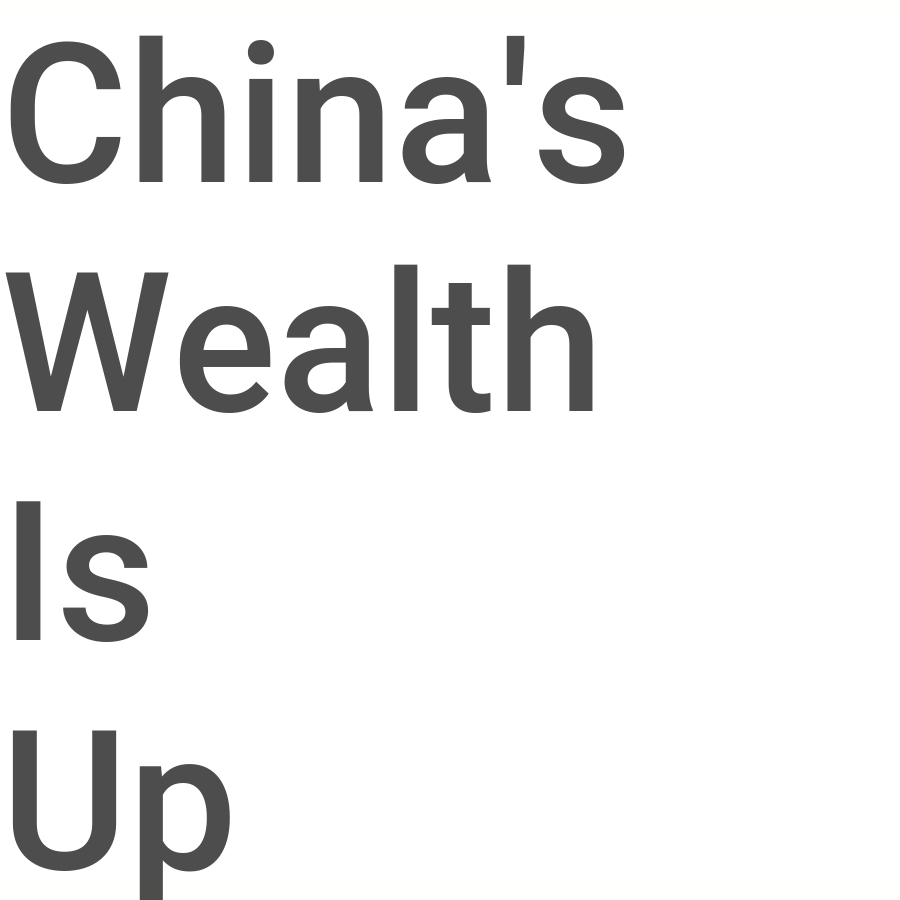 FactCheck.org Rating:
China's Wealth Is Up
"What we’ve done in the last two and a half years, we’ve picked up $14 trillion in net worth of the United States. And China has gone down probably by $20 trillion."
Donald Trump
President of the United States
https://www.whitehouse.gov/briefings-statements/remarks-president-trump-marine-one-departure-47/