Another fake quote attributed to Rep. Alexandria Ocasio-Cortez is circulating online. She didn’t say that “truck drivers are destroying America”; that quote came from a website that describes its content as satire.

Since Democratic Rep. Alexandria Ocasio-Cortez entered the political scene, she has been the target of many fake quotes.

Recently, a bogus quote circulating on social media claimed that she said: “Private truck drivers are destroying America. They get like 4 miles to the gallon, they think they own the road and they throw bottles of pee out their windows so they can keep driving. It’s a barbaric industry. Trucks should all be government regulated and drivers should be on full-time camera until we can figure out how to automate our shipping and do away with them altogether.”

She didn’t say that.

That quote came from a story posted on a website called BustaTroll.org, which is part of a network of sites that describe their content as satire. BustaTroll.org’s “About Us” page has this disclaimer: “Everything on this website is fiction. It is not a lie and it is not fake news because it is not real. If you believe that it is real, you should have your head examined.”

But the memes that copied the quote from the made-up story do not have any such disclaimer, and the Facebook pages that are sharing them don’t, either. Instead, they share the meme with statements such as, “Not getting political on this page but you ALL SHOULD KNOW this is what AOC thinks of ALL OF US,,,,,she needs to go.” And readers of those pages have responded with comments such as: “Hard to believe what kind of voters voted for this imbecile.”

But, of course, the quote is completely fabricated.

“Ocasio-Cortez Calls for Ban on Tractor-Trailers: ‘Trucks are Killing America.’” BustaTroll.org. 14 May 2019. 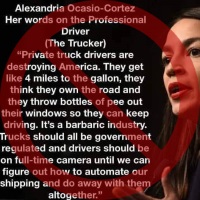