In a Rose Garden address to comment on a surprisingly strong May jobs report, President Donald Trump continued to repeat false, misleading and exaggerated claims about the economy, the administration’s response to COVID-19, the border wall, veterans programs and trade with China.

The Bureau of Labor Statistics reported on June 5 that the economy had added 2.5 million jobs in May and the unemployment rate had declined 1.4 percentage points to 13.3%. Shortly after the announcement, the president held a press conference, calling it a “very big day for our country” as it seeks to recover from the novel coronavirus that shut down large segments of the U.S. economy.

Below we briefly recount some of his misstatements about the economy and other topics in his remarks.

Not the “greatest economy”: The president said that prior to the coronavirus pandemic, “We were very strong.” And it’s true that stocks were high (the Dow Jones Industrial Average had a record close at 29,551.42 on Feb. 12), and unemployment was at a 50-year low of 3.5%, as we have written.

As we also have reported, the economy has gone through many periods of more robust growth than it has under the Trump administration. The real (inflation-adjusted) gross domestic product, or GDP, grew 2.3% last year — down from 2.9% in 2018, according to data released on Feb. 27. Over the last 39 years — dating to Ronald Reagan’s presidency — the nation’s real economic growth has reached or exceeded Trump’s peak year of 2.9% 19 times, including under then-President Barack Obama in 2015.

“Most people working”: Trump also repeated a meaningless boast that prior to the pandemic, “[w]e had the most people working in the history of our country, almost 160 million. We were never even close to that.” But, as we’ve written, that’s to be expected as the population rises.

There are notable exceptions, such as recessions and now a pandemic, but the number of employed Americans steadily rises with the population. (See the chart below from the Bureau of Labor Statistics.) 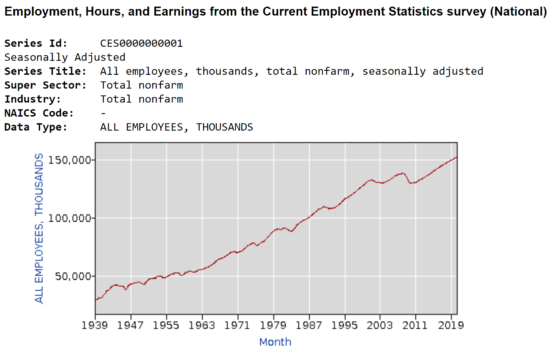 A month after the Great Recession started in December 2007, the number of Americans working peaked at 138.4 million in January 2008, before rapidly declining. It took until May 2014 to recover those lost jobs, but then the U.S. again started setting employment records through Obama’s second term and into Trump’s first — until the pandemic.

Also, Trump exaggerated when he said the U.S. prior to the pandemic had “almost 160 million” jobs. The peak occurred in February at 152.5 million jobs, according to BLS. It is currently at 132.9 million.

Employment “equality”: Trump falsely claimed that the May jobs report showed strength across the board. “What we’re announcing today is a tremendous tribute to equality,” he said.

The president has made this claim numerous times. As of June 4, the U.S. had conducted 19.81 million tests, more than any other country, according to a chart from Our World in Data, a project based at the University of Oxford. But on a per-capita basis — per 1,000 population — several countries still have conducted more testing, including Iceland, Denmark, Russia, Italy, Australia and New Zealand. Another source, Worldometer, a data aggregation website, had the U.S. at number 33 on June 5 in terms of tests per 1 million people among other countries and territories.

Experts also have recommended looking at the number of tests per confirmed case of COVID-19. By that measure, the U.S. also lags behind several other countries.

“We did not have ventilators when we started,” Trump said about the breathing machines that several states requested from the federal stash in order to treat some patients with COVID-19. “The previous administration left us empty cupboards.”

In a 2017 article, the Centers for Disease Control and Prevention said there were about 9,000 ventilators in the stockpile as of at least 2010. And earlier this year, Richard Branson, a respiratory care specialist and professor emertius at the University of Cincinnati, said that, in the 20 years prior to the coronavirus pandemic in 2020, the government had never distributed ventilators from the U.S. stockpile. Not even during the 2009 H1N1 pandemic were ventilators deployed from the stockpile, according to the Department of Health and Human Services.

Plus, in 2016, the year before Trump was inaugurated, reporters said they saw ventilators during a tour of at least one of the U.S. facilities where the machines and the rest of the stockpile’s massive inventory are stored in the event of a health crisis.

Trump made a number of familiar misstatements about his administration’s travel restrictions on China.

On Jan. 31, the Trump administration declared a public health emergency for the novel coronavirus and announced travel restrictions to and from China, effective Feb. 2. Under the restrictions, non-U.S. citizens, other than the immediate family of U.S. citizens and permanent residents, were prohibited from entering the U.S. if they had traveled to China within the previous two weeks.

Trump, June 5: [W]e could actually close our country, save millions of lives, stop people very early on from China, from coming in, because we stopped early. At the end of January, very early, people coming from China who were infected, coming into our country. That was a very hard decision to make. Nobody, almost nobody wanted me to make it. I would almost say nobody wanted me to make it. But we made that decision. … We saved tens of thousands of lives with that decision.

Impact of the restrictions: There is no evidence for Trump’s claim that the U.S. saved “tens of thousands of lives with that decision.”

Trump has frequently asserted without evidence that the travel restrictions saved lives, with the total escalating over time from “a lot” to “hundreds of thousands.” But as we have reported, we have found no support for such claims, and the White House hasn’t provided any.

The few studies that have been carried out estimate travel restrictions the United States and other countries enacted on China had modest impacts, slowing the initial spread outside China but not containing the coronavirus pandemic. Past studies also have found travel restrictions could delay the path of the spread of disease but do little to contain them.

Saad B. Omer, director of the Yale Institute for Global Health, told us he hasn’t seen any evidence to support the president’s claims. Travel restrictions “can have an impact if you shut down 90% of all travel,” Omer said. But “even then, it delays it a little bit but it doesn’t stop it.”

“What this data shows is that the United States was neither behind nor ahead of the curve in terms of imposing travel restrictions against China,” Samantha Kiernan, a research associate on global health, economics, and development at the Council on Foreign Relations, told us via email.

Trump didn’t act on his own: Trump also repeated the claim that “nobody” else wanted him to issue the restrictions. But according to Health and Human Services Secretary Alex Azar, that isn’t true.

“The travel restrictions that we put in place in consultation with the president were very measured and incremental,” Azar told reporters on Feb. 7. “These were the uniform recommendations of the career public health officials here at HHS.”

Border wall: Trump touted the progress on construction of southern border fencing, which he said is now “up to 210 miles long.” But as he often does, Trump misleadingly failed to note that the vast majority of that is either secondary fencing or replacement for existing dilapidated fencing. To date, just three miles of fencing has been built where no barriers previously existed.

According to U.S. Customs and Border Patrol data, as of May 22, there has been about “194 miles of new primary and secondary border wall system” constructed since Trump took office. It is plausible that between May 22 and June 5, that number has risen to 210 miles, as the president said. But the vast majority of that new construction has been to replace existing fencing.

According to CBP, 167 of the 194 miles of “new border wall” built as of May 22 was “in place of dilapidated and/or outdated designs.” Another 24 miles was secondary wall, some of it replacing dilapidated designs and some of it where there had not previously been secondary barrier.

The 194 miles of new fencing built under Trump includes only about “3 miles of new border wall system constructed in locations where no barriers previously existed,” CBP notes.

But more is coming. According to CBP, funding is in place from fiscal year 2019 and 2020 budgets for construction of hundreds of miles of fencing.

False Veterans Choice boast: The president repeated a favorite, and wrong, talking point about the Veterans Choice Program, which was created by bipartisan legislation signed into law by President Barack Obama on Aug. 7, 2014. In Trump’s telling, the program was created under his administration — “we got choice approved for the vets,” he claimed — and it’s something people had been “trying to get” for “almost 50 years.”

Again, the legislation was passed in 2014. It allowed veterans to receive care from non-VA health care providers if they were unable to get a timely appointment or faced long travel distances to VA medical facilities. Trump has continued the program. And he has been spreading falsehoods about its origin since 2018, when he wove a tale about how the program was “the greatest idea I think I’ve ever had.”

Misleading VA accountability claim: In Trump’s speeches, he often pairs the falsehood about “choice” with a misleading description of the Veterans Affairs Accountability and Whistleblower Protection Act, legislation that was indeed enacted during his time in office, in June 2017. The law made it easier for the VA secretary to remove VA staffers; it shortened the firing process and the appeals process. But Trump misleadingly suggested the VA couldn’t fire “bad people” before.

“It’s called VA Accountability, where we can now fire people that don’t treat our vets good. We have sadists, we have thieves, we have a lot of bad people,” he said. As we found when Trump was more explicitly claiming “you couldn’t fire anybody in the VA” before the accountability law, the VA could and did fire people prior to this law. Before Trump took office, the VA had fired more than 2,000 employees each year dating back to 2006, according to data the agency reported to the Office of Personnel Management.

China trade: The president continues to exaggerate the trade deficit with China. In discussing trade, Trump said, “We helped rebuild China. We gave them $500 billion a year — how stupid.”