As President Donald Trump often tells it, the Department of Veterans Affairs could not fire unruly or underperforming employees before he signed a bill overhauling the agency’s procedures in 2017. He’s wrong about that.

Going back to 2006, the VA fired more than 2,000 employees each year before Trump took office, according to data the agency reported to the Office of Personnel Management.

It’s true that the bipartisan Veterans Affairs Accountability and Whistleblower Protection Act aims to make it easier for the VA secretary to remove employees by, among other things, shortening the firing process and expediting the appeals process for senior executives.

It’s also true that the number of terminations for performance and disciplinary reasons increased by 24 percent during Trump’s first year, from 2,672 in 2016 to 3,315 in 2017, according to OPM figures.

Even so, it’s still the case that 1,178, or 35.5 percent, of all those firings in 2017 occurred in the five full months before Trump signed the legislation into law last year in late June.

Trump most recently touted the law in remarks he made in Missouri at the Veterans of Foreign Wars of the United States National Convention on July 24. He said it allows the VA to say “you’re fired” to any employee who “mistreats or neglects or abuses our great veterans in their time of need.”

“Before, there was nothing you could do,” he claimed. “You had to live with these people.”

It’s not the first time the president has made such a statement.

“And just so you understand, accountability — you couldn’t fire anybody in the VA,” Trump said at a Salute to Service dinner in West Virginia on July 3. “They could be sadists. They could be late. They could be bad. They could have lots of problems. They could talk back to you. You couldn’t do a thing. For 40 years, they’ve been trying to get it passed, and we got it passed. It’s called VA Accountability. And as I’ve said before, we now look at the person that violates our great veterans, and we say, ‘Jim, get the hell out of here. You’re fired.’”

And he made similar claims back in September, December, March and June.

But it’s not true that nothing could previously be done to remove VA employees. 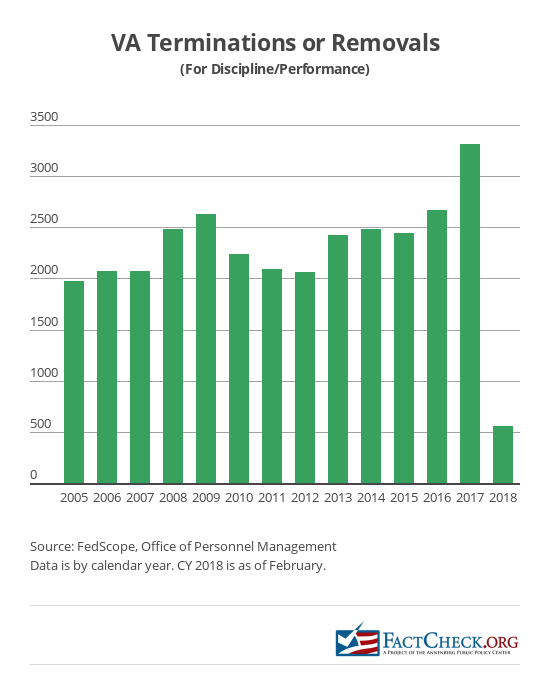 The Office of Personnel Management keeps data on federal employment, including terminations for discipline or performance going back to fiscal year 2005. The data show that, on average, the VA fired about 2,300 employees each fiscal year before Trump’s presidency. The average is nearly the same when calculated by calendar year, which lines up more closely to when presidents take office in late January. (The VA has more than 382,000 total employees.)

So, clearly, it was already possible for workers to be relieved of their duties.

That said, the legislation that Trump signed, and which passed with bipartisan support in both chambers (by a 368-55 vote in the House and by unanimous consent in the Senate), was intended to make it easier to more quickly remove employees.

It gives the secretary of the VA more authority to “expedite the removal, demotion or suspension of employees at the VA based on performance or misconduct,” according to summaries of the law from its Republican and Democratic sponsors.

One way it does that is by limiting the time period for removal of rank-and-file employees and for appeals by senior executives who have been fired and want to dispute those actions.

Again, that just means it was possible to fire VA workers before the current law was in place.

FactCheck.org Rating:
False
A VA accountability law enacted last year allows the VA to say "you're fired" to employees. "Before, there was nothing you could do."
Donald Trump
President of the United States
https://www.whitehouse.gov/briefings-statements/remarks-president-trump-veterans-foreign-wars-united-states-national-convention-kansas-city-mo/