The recently released jobs report from the Bureau of Labor Statistics provided an opportunity for Democrats and Republicans alike to spin the facts in their favor.

In a May 10 speech about the economy, Biden repeated a misleading talking point about job growth during his time as president — and, in the process, he added a false comparison to former President Jimmy Carter.

Biden, May 10: As we learned Friday, the economy created 266,000 jobs in April. In fact, altogether, since the time we took office, we’ve created more than 1.5 million jobs in the country. It’s the most jobs created in the first 100 days of any president on record: more than three times the solid job creation that President Carter saw in his first 100 days and more than six times what President Reagan saw.

Data from the Bureau of Labor Statistics show that, as of April, total nonfarm employment grew by 1,572,000 since January.

Although no president is responsible for all jobs gained or lost, that is the most jobs added in that time period during any newly elected administration going back to 1939, which is when BLS began reporting data. It’s also, as Biden said, more than six times the 250,000 increase in employment during Ronald Reagan’s first few months as president in 1981.

However, it is not “more than three times” the 1,038,000 increase in employment during the same time period under Carter in 1977.

Biden meant to compare his record to the 502,000 jobs gained early in 1993 under former President Bill Clinton, according to the White House transcript of Biden’s remarks — which corrected the president’s misstatement.

However, on a percentage basis, the growth in jobs under Carter was slightly better than the increase so far under Biden.

BLS data show that employment went up by about 1.1% from January, when Biden was sworn in, to April. During the same January-to-April period in 1977, employment grew by nearly 1.3% under Carter. (The chart below excludes two former presidents who didn’t assume office in January, Lyndon Johnson and Gerald Ford.) 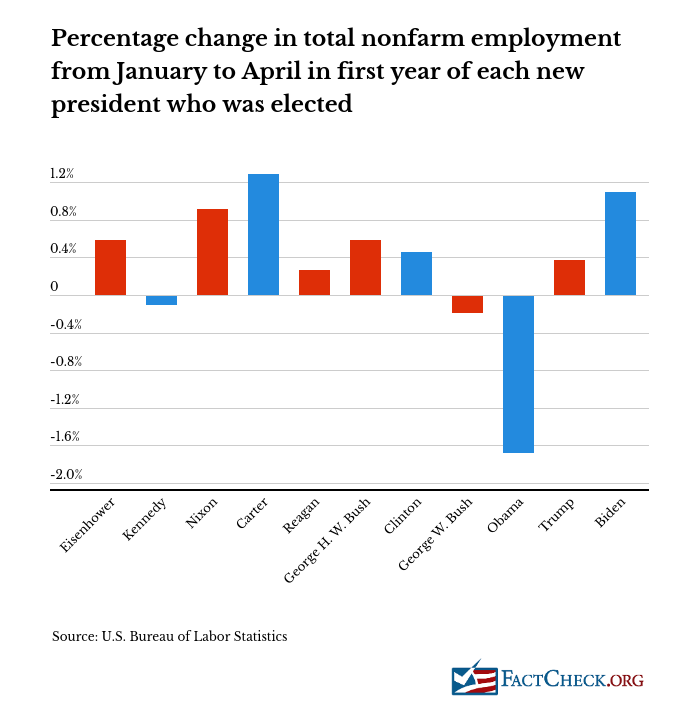 With an April jobs report that underperformed expectations, the Republican National Committee says Biden is “squandering the recovery he inherited.” But the average pace of job gains has been far greater in the first three months under Biden than it was in the three months before he took office.

Economists surveyed by Bloomberg prior to the release of employment figures for April had projected a surge of 1 million new jobs that month. Indeed, Atlanta Federal Reserve Bank President Raphael Bostic said on March 30, “a million jobs a month could become the standard through the summer.”

So when the Bureau of Labor Statistics announced on May 7 that the U.S. economy had added just 266,000 jobs in April, Bloomberg called it “among largest downside misses ever.”

A blog post from the Republican National Committee highlighted that disappointing jobs report saying: “The April jobs report shows that Joe Biden is squandering the economic recovery he inherited from President Trump and Republicans in Congress.” Biden was “handed an economy on the rebound,” the RNC said, and “Democrats’ policies are destroying it.”
We take no position on whether the Biden administration’s policies are helping or hurting the economy’s recovery — that’s a matter for political debate. But the RNC post is cherry-picking data to suggest that the economy has reversed or slowed an upward trend inherited from the previous administration.

As the chart below from the Bureau of Labor Statistics shows, the massive job losses due to COVID-19 were followed by rapid job recovery in the spring and summer, but the “super V” recovery former President Donald Trump boasted about frequently during the presidential campaign slowed considerably in the fall and winter. 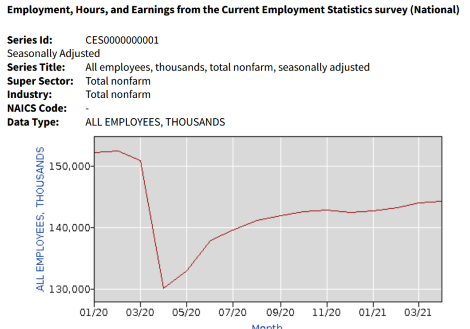 Between February and April 2020, the economy lost 22.4 million jobs. By the time Biden took office, 12.6 million of those jobs had returned. But there were still 9.8 million fewer jobs than in February 2020. And as we said, the jobs recovery had slowed considerably in the months before Biden took office.

In addition to disappointing job gains, the BLS report for April showed the unemployment rate ticked up slightly to 6.1% (from 6% the month before). Although slight, it was the first rise in the monthly unemployment rate since the recovery began. Meanwhile, the labor force participation rate rose slightly from 61.5% to 61.7%. Although that’s 1.6 percentage points lower than it was in February 2020, it’s the highest rate since August, suggesting more Americans are starting to look for work.

As always, we note that economists often caution that presidents get too much praise and blame for the economy. In this case, job gains during the Biden administration have been buoyed by the rollout of COVID-19 vaccines authorized before he took office.