Animal testing and clinical trials were conducted before the COVID-19 vaccines were granted emergency use authorization in the U.S. But a state senator in Texas falsely claimed at a hearing that animal tests were “stopped” because the “animals were dying” and that “they didn’t do the human testing.” A clip of his erroneous remarks is spreading on social media.

How were safe and effective vaccines developed so rapidly?

The unprecedented speed of the COVID-19 vaccines was due to multiple factors.

Candidates for an mRNA vaccine — the technology used for the Pfizer/BioNTech and Moderna vaccines — can be quickly designed once scientists know the genetic sequence of the virus and which protein to target. Researchers already knew from past experience with SARS and MERS, which are other diseases caused by coronaviruses, that the spike protein the virus uses to enter cells was likely the right one.

Similarly, Johnson & Johnson has been researching adenovirus-based vaccines — the technology its COVID-19 vaccine uses — for many years in working on vaccines for HIV and Zika, and its Europe-approved Ebola vaccine.

The testing of the vaccines was also sped up by consolidating some of the early testing stages. Companies typically don’t want to proceed with expensive trials until there’s a sign the vaccine will work, but the government took on that financial risk in many cases.

The phase 3 randomized controlled clinical trials were also fast because high levels of disease transmission meant COVID-19 cases quickly accumulated among trial participants. And production capacity was sped along by starting manufacturing even before knowing whether the vaccines would be successful.

How were the vaccines tested?

The authorized or approved vaccines were initially tested in animals and early phase clinical trials, in which scientists evaluated different doses, checked for the expected immune responses and monitored for potential safety issues. To find out whether the shots prevent disease and are safe, the vaccines that passed the first set of tests were then evaluated in phase 3 trials.

The Moderna and Novavax phase 3 trials each included about 30,000 volunteers, while the Pfizer/BioNTech and Johnson & Johnson trials included about 44,000 each. In each of these trials, half of the participants received a placebo, while the other half received the vaccine, and the volunteers were followed over time to see if they fell ill with COVID-19 and had any adverse reactions.

The trials were overseen by independent data and safety monitoring boards, and the results were reviewed not only by the Food and Drug Administration, which made the decision to authorize the vaccines for emergency use, but also by an outside panel of experts advising the agency. Another independent group, the CDC’s Advisory Committee on Immunization Practices, also reviewed the data and recommended use of the vaccines.

Following analysis of additional data from the phase 3 clinical trials, safety surveillance data and a review of the manufacturing process, including inspections of production facilities, the FDA granted full approval of the Pfizer/BioNTech vaccine on Aug. 23, 2021, and the Moderna vaccine on Jan. 31, 2022.

Pediatric versions of the mRNA vaccines were authorized based on immune response data, which showed vaccinated kids had similar immune responses to vaccinated young adults, for whom a clinical trial previously demonstrated efficacy. Booster doses of the original vaccines were also authorized primarily based on data showing the additional shots increased levels of virus-specific antibodies.

For the Pfizer/BioNTech and Moderna bivalent booster shots, which target both the original version of the coronavirus and omicron subvariants, the FDA used an approach similar to how it approves flu vaccines each year, in which clinical studies are not required since the changes to the vaccine are minor. Regulators considered animal data, along with clinical data on another omicron bivalent booster and data on the original shots.

Human trials for the omicron-updated bivalent boosters are ongoing.

The COVID-19 vaccines now authorized for emergency use in the U.S. were subject to the same forms of research routinely expected of all vaccines — even though they were manufactured in record time. In part, the process was sped up thanks to previous, related vaccine research and because some of the early testing stages were consolidated.

But a Texas state lawmaker recently claimed, falsely, that animal trials for the vaccines were “stopped” because “the animals were dying.” And his words are now fueling widely viewed social media posts seeking to discredit the vaccines.

“COVID Jab: They Skipped all Animal Trials Because all Animals Were Dying & Went Directly to People,” reads the text of a video meme repeatedly posted on Instagram. It also cites where the video was taken: “Texas State Senate, May 2021.”

But none of that is accurate.

We traced the clip back to a May 6 public hearing before the Texas State Senate Committee on State Affairs, which was considering legislation by Republican state Sen. Bob Hall. The bill in question seeks to prohibit any mandates requiring COVID-19 vaccination. 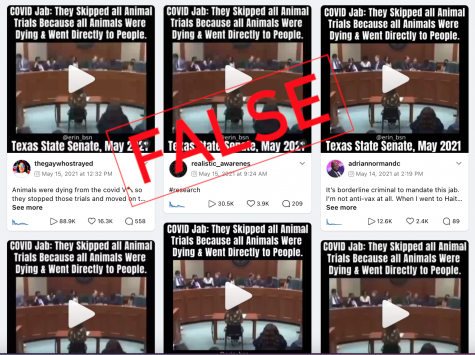 Among the witnesses testifying was Dr. Angelina Farella, a pediatrician who criticized the COVID-19 vaccines and also repeated some erroneous claims about the vaccines.

Farella wrongly claimed, for example, that “we have in excess of 4,000 deaths and this thing has not been pulled yet.” There have not been 4,000 deaths confirmed to be due to the vaccine as Farella suggested. The figure may refer to reports submitted to a federal database used to monitor vaccine safety — but, as we’ve explained, anyone can submit such reports, so they’re not verified or proof that the vaccine caused the reported problem. The system has been frequently misrepresented.

Nearly 44 minutes into the committee hearing, during an exchange with Farella, Hall also suggested that the COVID-19 vaccine should have been “pulled from the market” and made his erroneous claim about testing.

Hall, May 6: And have you seen any other vaccine that was put out for the public that skipped the animal tests?

Farella: Never before — especially for children.

Hall: What I have read, they actually started the animal tests and because the animals were dying, they stopped the tests. Folks, I think that’s important to understand there. That what we’re talking about is, the American people are now the guinea pigs. This is the test program that’s going on. They didn’t do the human testing and they stopped the animal tests because the animals were dying, and then they turned it out for the public.

But as we said, testing on both animals and humans was conducted before the COVID-19 vaccines were granted emergency use authorization by the Food and Drug Administration. And it is not the case that animal tests on the vaccines “stopped” or that the “animals were dying.”

In the development of Moderna’s vaccine, a preclinical study published in July showed vaccinated monkeys that were challenged with the SARS-CoV-2 virus rapidly cleared the pathogen from their bodies, as we’ve explained. And a study published the following month found that in mice, the vaccine successfully prevented infection in the lung and nose.

Similarly, the Pfizer/BioNTech vaccine underwent preclinical testing in both mice and monkeys, as is noted in an FDA memo laying out the information considered in authorizing the vaccine for emergency use.

And the Johnson & Johnson vaccine was also tested in several nonclinical studies involving animals, including hamsters and monkeys.

Hall’s claim that “they didn’t do the human testing” is also verifiably false.

The FDA’s decision to grant the emergency use authorizations for each of the vaccines reviewed data from clinical trials — each involving tens of thousands of participants. All of the trials provided an equal number of participants with a vaccine and a placebo.

We reached out to Hall’s office to ask what he was referencing when he made his remarks, but didn’t hear back. As the Texas Tribune has documented, Hall has spread other misinformation about COVID-19 throughout the pandemic.

The false narrative that animal tests were “skipped” for the mRNA vaccines — those from Pfizer/BioNTech and Moderna — was fact-checked by our colleagues at the Associated Press in November. And we’ve previously reported on other claims about the COVID-19 vaccines that misrepresented old studies involving animals and vaccine candidates for other coronaviruses.

Update May 24: Facebook has now removed posts of the video meme from its platforms. A spokesperson for the company told us the posts were removed because they violated Facebook’s policies against COVID-19 misinformation—which ban “[c]laims that COVID-19 vaccines are untested,” among other things. We note that such content-removal decisions are made by Facebook, as part of its Community Standards enforcement, and are independent of our work as a third-party fact-checking partner with Facebook.