President Joe Biden has been saying “wages are up” and rising “faster than inflation.”

“Even after accounting for rising prices, the typical American family has more money in their pockets than they did last year,” the president said Dec. 3.

Well, not so fast.

While weekly paychecks have indeed gotten larger since Biden became president, they have not kept pace with the rapid rise in prices of consumer goods and services during that time.

Monthly figures compiled by the Bureau of Labor Statistics show average weekly earnings for production and nonsupervisory employees — who make up 81% of the private sector workforce — have continued to go up since Biden’s inauguration in January. That is, if inflation isn’t taken into account. 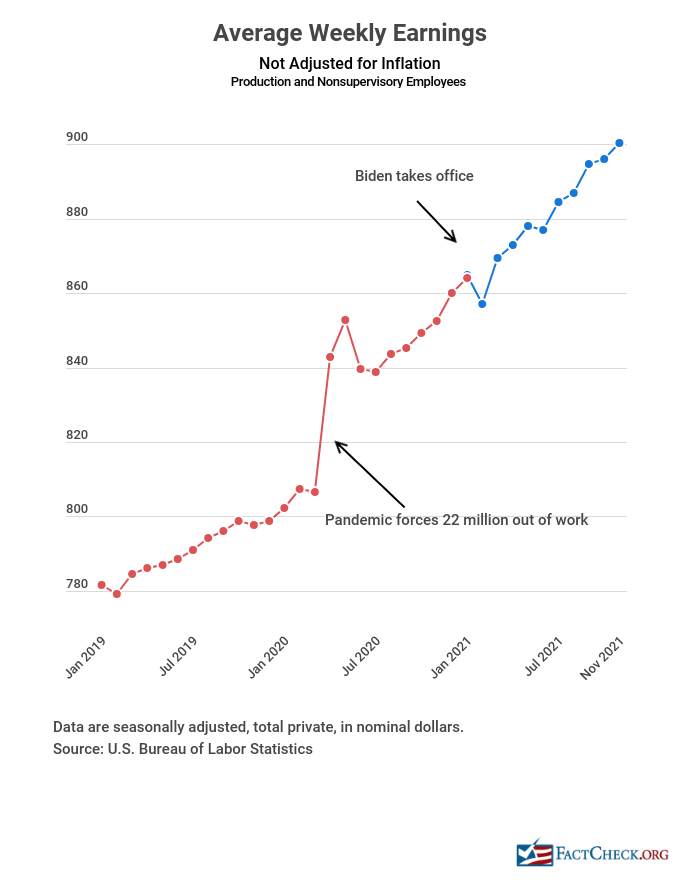 But adjusting those figures for rising prices gives a different picture entirely. Stated in what economists call constant dollars — valued at their average level in 1982-84 — those weekly earnings for rank-and-file workers have actually declined. 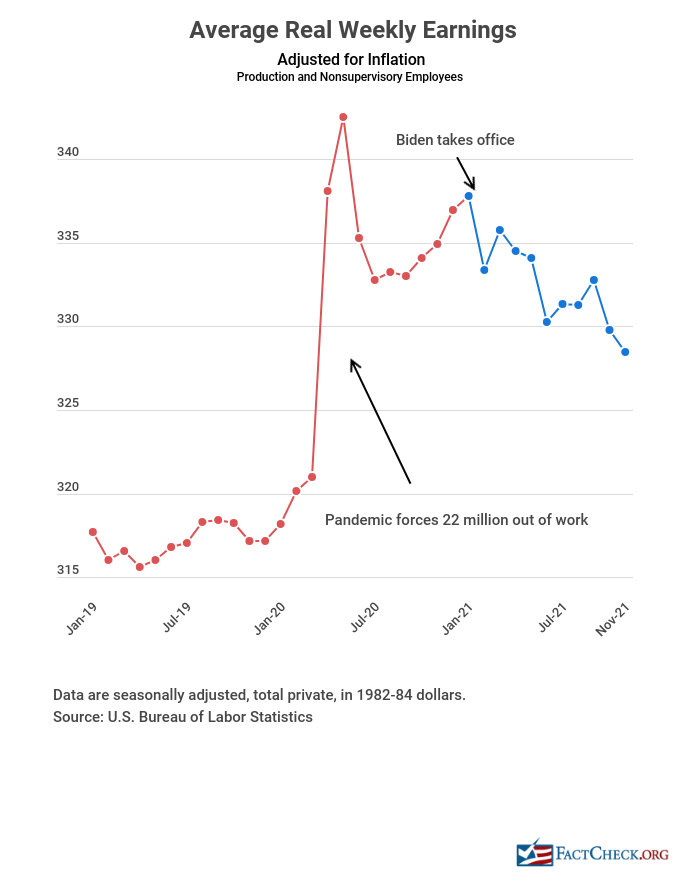 The difference is rather stark. While those paychecks were 4.1% larger in November than they were in January, they will buy 2.8% less due to rising prices.

Those rank-and-file workers have suffered less than their bosses. For all private sector workers, including managers and executives, weekly earnings averaged 3.1% more but could buy 3.0% less.

Even at their recent peak, inflation-adjusted earnings remained well below the levels reached in the late 1960’s. For a broader historical view, see our June 28, 2019 story “Are Wages Rising or Flat?”

Biden sometimes draws a comparison to wages now and wages “before the pandemic,” rather than before he took office.

As is evident in our graphs, there was a spike in average pay during April and May of last year, at the start of the pandemic and the ensuing lockdown. But that happened when Donald Trump was president, and was largely a statistical anomaly. The average went up largely because the 22 million workers who were laid off during that time were mostly lower-paid workers, including restaurant servers and retail clerks. Removing their earnings from the calculation pushed up the average for those lucky enough to still be working, regardless of whether they saw any increase.

In his recent remarks Biden shifted away from speaking of “wages” alone, and instead refers to money in general.  On Dec. 9 he issued a statement saying “Americans on average have about $100 more in their pockets each month than they did last year, after accounting for inflation.”

Here he seems to be referring to all sources of income, including massive but temporary injections of government assistance during the pandemic. We asked the White House how the president arrived at this figure, but we received no response. So we turned to the broadest measure we know of, the “disposable” or after-tax income figure produced by the Bureau of Economic Analysis.

However, the BEA’s estimates have been quite volatile, swinging wildly from month to month. So the time period chosen for comparison makes a big difference.

The per-capita or per-person average for disposable income (line 38) is given on an annualized basis, so must be divided by 12 to get the BEA’s estimate for any particular month. The most recent figures actually show $265 less income in the most recent month on record (October) than in the month Biden took office.

Biden’s comparison was to “last year,” so we also looked at the BEA’s figures on a quarterly basis. Those do show that per-capita disposable income was nearly $218 per month higher in the most recent quarter (July through September) than in the last quarter of 2020, just before Biden took office.

That figure amounts to an increase of 5%, just barely ahead of the 4.8% rise in the Consumer Price Index between December 2020 and September, the end of the third quarter of this year.

But that’s about the only statistic we found that supports the president’s wage claims, and, as we just noted, the BEA’s more recent monthly figures show a decline in disposable income even without adjustment for inflation. So we rate Biden’s claims mostly malarkey.