At the NATO summit in Brussels, President Donald Trump made several false statements about the defense spending of the member countries.

At his press conference after the summit, Trump criticized NATO countries for failing to meet a commitment they made in 2014 to increase their defense spending to at least 2 percent of each country’s gross domestic product within a decade.

The countries memorialized that commitment at the Wales summit in September of that year after then-President Obama urged the allies to increase spending to combat Russia’s aggression in the Ukraine and the terrorist group known as ISIS.

Trump, July 12: Prior to last year, where I attended my first meeting, it was going down — the amount of money being spent by countries was going down and down very substantially.

Trump’s first NATO meeting was in May 2017 — about two-and-a-half years after the commitment NATO countries made in Wales to increase defense spending.

As shown in the chart below from a July 10 NATO report, NATO Europe and Canada responded by increasing defense spending by 1.83 percent in 2015 and 3.14 percent in 2016 before Trump attended his first meeting. 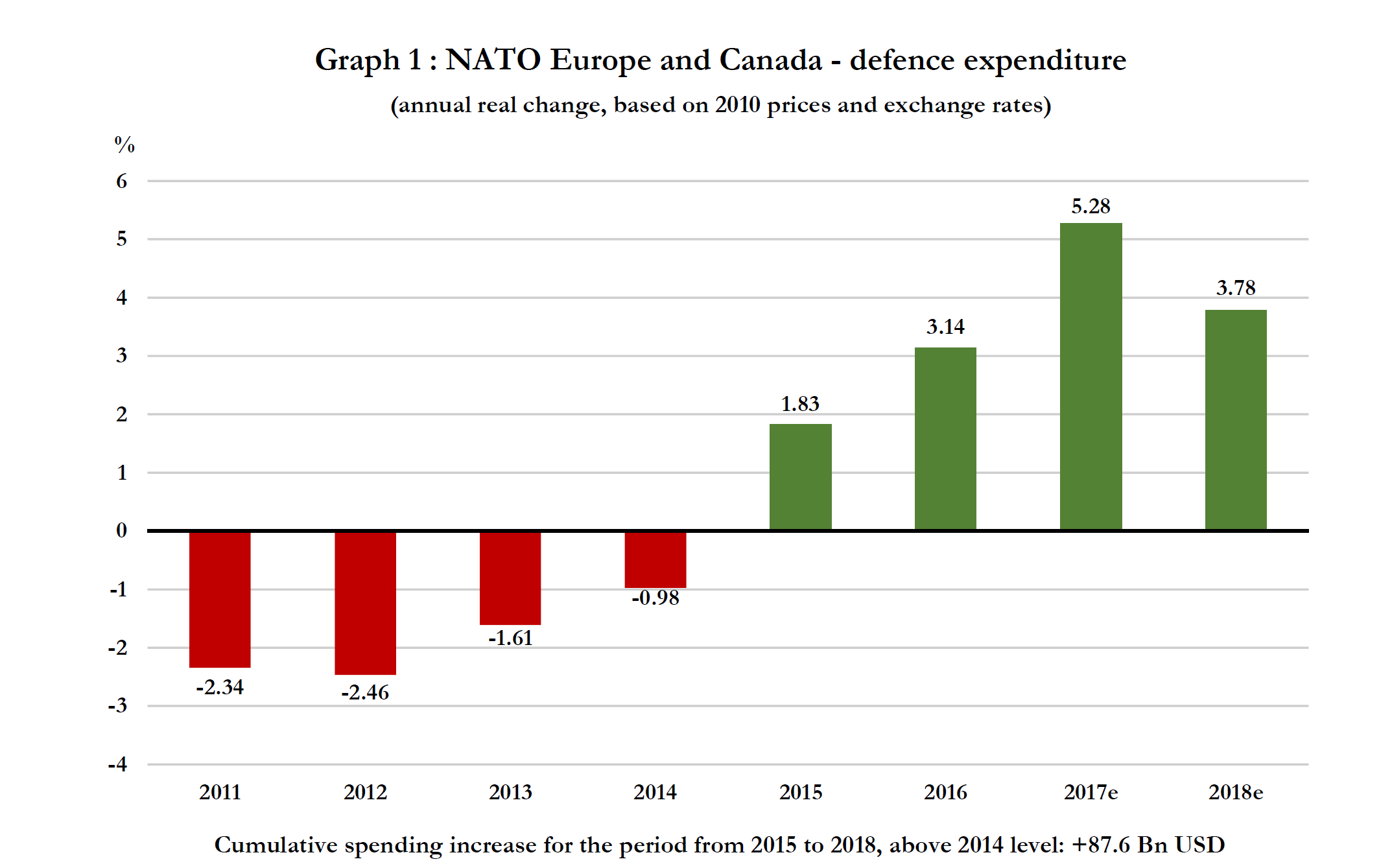 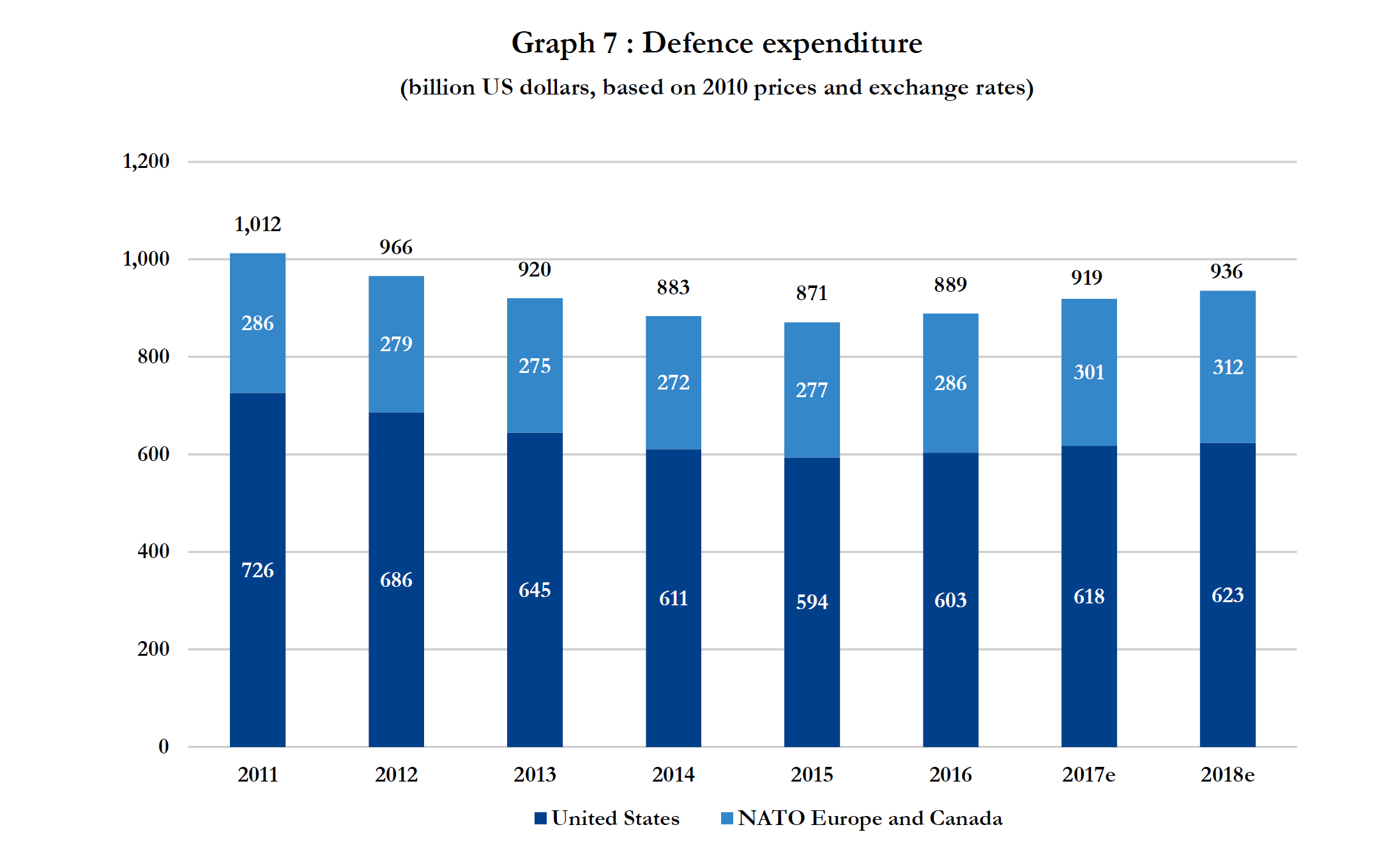 Since Trump’s meeting, the other NATO countries have increased their spending even more — by $26 billion, or 9 percent, from 2016 to 2018, as the NATO chart shows. Trump likes to take credit for the increased spending by NATO countries, but he cannot say that “prior to last year … the amount of money being spent by countries was going down and down very substantially.”

A day earlier at a breakfast meeting, Trump wrongly claimed that NATO countries that have not been spending 2 percent of GDP for defense owe the U.S. “a tremendous amount of money.”

Trump, July 11: And, frankly, many countries [in NATO] owe us a tremendous amount of money for many years back, where they’re delinquent, as far as I’m concerned, because the United States has had to pay for them. So if you go back 10 or 20 years, you’ll just add it all up. It’s massive amounts of money is owed.

The president’s statement “is not accurate,” Christopher Preble, vice president for defense and foreign policy studies at the libertarian Cato Institute, told us in an email.

“NATO countries do not owe the United States money. And the commitment they made to reach the 2% of GDP threshold was to have done so by 2024,” Preble wrote. “NATO member states fund their own militaries. They don’t pay us to fund ours,” he said.

In fact, for the majority of the 29 countries in the alliance, the 2 percent of GDP benchmark is just a “guideline,” not a mandate.

When NATO leaders originally committed in 2006 to try to spend that much on their own defense, a NATO spokesman made it clear that “this is not a hard commitment that they will do it. … But it is a commitment to work towards it.” And a 2014 press release about the Wales summit said that countries again agreed to either “aim to continue” spending that amount or “aim to move towards the 2% guideline within a decade.”

As of 2018, only four members of the alliance “have either national laws or political agreements which call for at least 2% of GDP to be spent on defence annually,” according to NATO. They are Latvia, Poland, Lithuania and Romania.

Trump repeatedly claimed that “everyone has agreed to substantially up their commitment.” But leaders of several European nations later said there were no formal agreements to increase spending beyond previously set goals, and none was provided by NATO.

Asked during a press conference for details about new commitments agreed to at the summit, NATO Secretary General Jens Stoltenberg said only that everyone “developed a better common understanding of the challenges, the urgency of spending more” and that allies had promised to “redouble their efforts” to increasing defense spending.

However, Trump left the impression that specific new commitments for funding had been agreed upon.

“Everyone has agreed to substantially up their commitment,” Trump said in the press conference after the summit. “They’re going to up it at levels that they’ve never thought of before.”

In the past, funding commitments were only an “amorphous number” and a “goal,” but now, he said, they are “a real commitment.”

Trump, July 12: The commitments are made at a higher level than they’ve ever been made. And the money, it will be paid out faster — far faster. You know, the 2 percent was a range, a goal. It wasn’t something that they were committed to. Now it’s a commitment. There’s a big difference — the 2 percent number. And that’s why so many people weren’t reaching it or hitting it. It was just sort of like this amorphous number out there. Now it’s a commitment, a real commitment.

As we explained, in 2006, NATO members agreed to try to spend at least 2 percent of their gross domestic product on defense spending. And in 2014, they agreed again to aim to meet that standard by 2024.

After the summit, several NATO leaders said no new commitments had been made that would alter those agreements.

“I made clear that we know that we have to do more and that we have been doing so for quite a while,” German Chancellor Angela Merkel said. “That turning point has long been initiated. … The American president has demanded, what has been discussed for months, that the burden-sharing has to change. And we made clear, well, I made clear for myself and others also made it clear, that we are on this path, which is in our own interest and can make us overall stronger.”

“It confirms the goal of 2 percent by 2024. That’s all,” said French President Emmanuel Macron.

And, Bloomberg reported, “Italy has no plans to change its defense spending plans as a result of the summit, Prime Minister Giuseppe Conte told reporters. Italy has focused more on targets other than the 2 percent goal, such as increasing its participation in NATO missions. ‘It isn’t just an accounting issue,’ Conte said.”

According to NATO figures, Germany, France and Italy spend 1.24 percent, 1.81 percent and 1.15 percent of their annual GDP on defense, respectively.

In a press conference after the summit, a reporter for the Washington Post asked Stoltenberg for details on any new commitments agreed to in the meetings.

Stoltenberg replied generally that everyone “developed a better common understanding of the challenges, the urgency of spending more, and allies committed to spending and to investing in our shared security.”

A reporter from the Financial Times tried again, asking, “On the substance, can you confirm then that nothing was agreed this morning either formally or informally that commits member states to going beyond the Wales 2 percent target or indeed any other commitments?”

Stoltenberg similarly replied: “We have made conclusions at this summit which confirms our support for NATO, the importance of investing more and all our allies agreed that we need to deliver on our commitments. There is a new sense of urgency. And all allies agreed to redouble their efforts.”

While the Summit Declaration issued after this year’s meeting continued to refer to the goal that 2 percent of GDP be spent on defense by 2024, Stoltenberg did highlight one small change. “Initiated by President Trump, last year, we agreed to develop national plans,” Stoltenberg said. “We have clearly stated this year that we need credible national plans, and I expect all allies to follow up on their national plans. And the national plans are a very valuable tool to make sure that we deliver, and that we increase defense spending substantially.”

Trump repeated several other inaccurate claims that we have written about before.

FactCheck.org Rating:
False
"Prior to last year, where I attended my first meeting, it was going down — the amount of money being spent [on defense] by [NATO] countries was going down and down very substantially."
Donald Trump
President of the United States
https://www.whitehouse.gov/briefings-statements/remarks-president-trump-press-conference-nato-summit-brussels-belgium/

FactCheck.org Rating:
False
"Many [NATO] countries owe us a tremendous amount of money for many years back, where they’re delinquent, as far as I’m concerned, because the United States has had to pay for them."
Donald Trump
President of the United States
https://www.whitehouse.gov/briefings-statements/remarks-president-trump-nato-secretary-general-jens-stoltenberg-bilateral-breakfast/

FactCheck.org Rating:
No Evidence
At the NATO summit, “everyone has agreed to substantially up their commitment” to increase defense spending.
Donald Trump
President of the United States
https://www.whitehouse.gov/briefings-statements/remarks-president-trump-press-conference-nato-summit-brussels-belgium/