Meanwhile, on social media, a quote about the wall falsely attributed to Pelosi made the rounds yet again.

“Building a Wall will violate the rights of millions of illegals,” reads the purported quote, featured in a meme shared in numerous Facebook posts. The meme doubles down by adding: “Yes, she actually said that.” 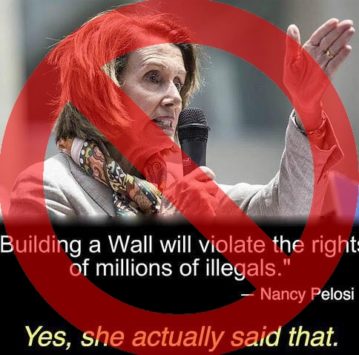 There’s no evidence to support that claim. We could find no record of Pelosi ever making that statement, which has circulated for months — despite previous fact-checking efforts by Snopes, PolitiFact and the Weekly Standard.

Pelosi has indeed bristled at Trump’s demand for a border wall, including in the Oval Office meeting Tuesday. It’s a posture she’s long maintained.

“The Democrats do not support the wall,” Pelosi said in a 2017 NBC interview. She called the wall “immoral, expensive, unwise” — a sentiment she echoed at a recent news conference.

“We, most of us, speaking for myself, consider the wall immoral, ineffective and expensive,” she said at her Dec. 6 press conference.

But there is no evidence Pelosi — who appears likely to return to the role of House speaker when Democrats assume control of the chamber in January — said it would “violate the rights of millions of illegals.”

Trump has insisted that the government’s next funding package should include $5 billion for the wall.