President Donald Trump is fond of saying that China is paying billions of dollars to the U.S. as a result of the increased tariffs he has imposed on imports of Chinese goods. Not true. The tariffs are taxes paid by U.S. importers in the form of customs duties, and to some extent by U.S. consumers in the form of higher prices.

Trump said it again most recently on Feb. 25, in remarks to state governors who were meeting in Washington, D.C.

The “billions” part is true — just barely. Most recent figures show monthly collections of duties on imports from China nearly tripled after the first round of Trump’s tariffs went into effect July 6, rising from an estimated $1.24 billion in June to $3.65 billion in October. Estimated collections were $3.30 billion in November, the most recent month for which the U.S. Census Bureau has released estimates, which may vary somewhat from actual collections. (Figures for December are delayed, due to the partial government shutdown.) 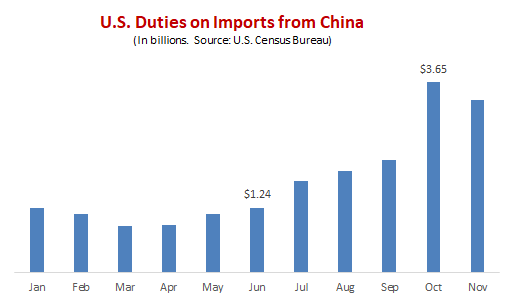 But those increased tariff duties aren’t paid by China, or even by Chinese companies. Import duties are paid by U.S. importers, either directly or more commonly through customs brokers. The government’s “Guide for Commercial Importers” advises those who use brokers to make out a separate check “payable to ‘U.S. Customs and Border Protection’ for those customs charges, which the broker will then deliver to CBP.”

And importers — including big retailers like Walmart and Target — face pressure to pass on those increased costs to consumers in the form of higher prices. The National Retail Federation calls Trump’s tariffs “a tax on American families.”

That was echoed by the president of the U.S. Chamber of Commerce, Tom Donohue, in his annual “State of American Business” address on Jan. 10. He said, “Let me be very clear. Tariffs are taxes paid by American families and American businesses — not by foreigners.”

Indeed, the pro-business Tax Foundation estimates that the tariff increases put into effect thus far — on goods from China as well as other countries — will increase federal revenue by nearly $42 billion annually, but also will cost the economy over $30 billion in reduced growth over an unspecified number of years, diminish job growth by more than 94,000 jobs, and hold down wage growth to 0.08 percent below where it would otherwise be.

Some argue that overall, the tariffs cost Chinese companies more than they cost U.S. consumers. Back in November, a study by EconPol Europe concluded that Trump’s threatened increase in the tariffs to 25 percent would raise “US consumer prices on all affected Chinese products by only 4.5% on average, while the producer price of Chinese firms declines by 20.5%.” As it happened, Trump delayed that increase pending trade talks with China, which are continuing.

So Trump is correct when he says the tariffs on China’s goods are “bad for them.”  The levies may even be worse for the Chinese than for Americans — and possibly could induce China to agree to a trade deal that reduces tariffs and curbs some practices that the U.S. has long seen as unfair, such as China’s appropriation of U.S. intellectual property.

But to say that “China is paying us” is not just an oversimplification — it’s wrong.

FactCheck.org Rating:
False
"Now, China is paying us, right now, billions and billions of dollars of tariffs a month. Every month, billions of dollars. I love it."
Donald Trump
President of the United States
https://www.whitehouse.gov/briefings-statements/remarks-president-trump-2019-white-house-business-session-nations-governors/