The Tax Cuts and Jobs Act passed in 2017 is making some changes to the way tax liability will be calculated this year, but nothing as drastic as one viral meme is claiming.

The meme, which has been shared 18,000 times on Facebook, starts out this way: “HERE ARE SOME THINGS YOU WON’T BE ABLE TO DEDUCT ON TAXES THIS YEAR.” Then it lists: “Student loan interest, medical expenses, property taxes, and any home office expenses not paid by my company. Also, the threshold for charitable donations has increased so you can forget recouping the donations to Wounded Warriors, Habitat for Humanity, and PBS.” It ends by claiming that, “If you own a private plane or jet you can deduct the maintenance of the aircraft.”

A lot of that is wrong and some of it is misleading.

Let’s start with the claim that certain deductions have been eliminated. Four out of the five that are listed in the meme haven’t been eliminated and the one has been. Here’s how the new tax law treats these deductions:

As for deducting the cost of private plane maintenance, Christopher Younger, a business aviation lawyer at GKG Law, said that deduction was already available to some taxpayers. What’s new is that used planes, not just new ones, are eligible for deductions. But, as always, the deductions are not available for recreational planes, only those that are used for business.

The larger issue that isn’t mentioned in the meme, though, is that most people don’t itemize their taxes, anyway. Most people take the standard deduction, which reduces the total amount of income that’s eligible to be taxed. The number of people who do that is expected to go up this year since the new law has nearly doubled the standard deduction through the year 2025.

Of the 150 million taxpayers in the country, the Joint Committee on Taxation has estimated that 46.5 million chose to itemize their deduction for the 2017 tax year, but only 18 million will choose to do so with the law’s higher standard deduction in effect for the 2018 tax year.

U.S. House. “H.R.1 – An Act to provide for reconciliation pursuant to titles II and V of the concurrent resolution on the budget for fiscal year 2018.” As passed 22 Dec 2017. 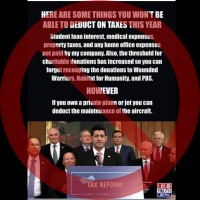