A fake tweet circulating online purports to show a message from President Donald Trump threatening to deport Rep. Ilhan Omar for comments she made referring to the 9/11 terrorist attacks.

When Rep. Ilhan Omar was panned last month for remarks she made referencing the 9/11 terrorist attacks, President Donald Trump chimed in on Twitter by sharing a video that spliced her words with footage of the twin towers falling in lower Manhattan. But he didn’t say that he would deport her.

A fake tweet, however, is going around the internet making it look like the president tweeted this message: “When I deport Ilhan Omar we can just say ‘some people did something’.”

That’s a reference to the part of Omar’s speech that critics have seized on. In an address at an annual Council on American-Islamic Relations event in March, the Minnesota Democrat said:

Omar, March 23: CAIR was founded after 9/11 because they recognized that some people did something and that all of us were starting to lose access to our civil liberties. So you can’t just say that today someone is looking at me strange, that I am going to try to make myself look pleasant. You have to say this person is looking at me strange, I am not comfortable with it. I am going to talk to them and ask them why. Because that is a right you have.

Her mention of 9/11 came about halfway through the speech, but it has overshadowed everything else she said. We wrote a story providing the context for her comments.

Although the president joined in on the criticism of Omar, he didn’t send the tweet threatening deportation. The bogus tweet is dated April 15. Trump tweeted 16 times on that date, but none of them match the one circulating now.

Not only that, but Omar is a naturalized U.S. citizen, so she can’t be deported unless she is stripped of her citizenship. 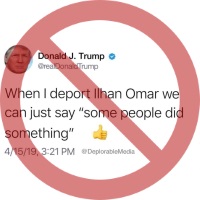